This month marks 20 years since the final of the first series of Pop Idol, the ultimate singing competition that led the way for the UK’s biggest talent shows which provided us with a wide range of artists we may never have seen perform otherwise, including a whole host of BCU alumni. 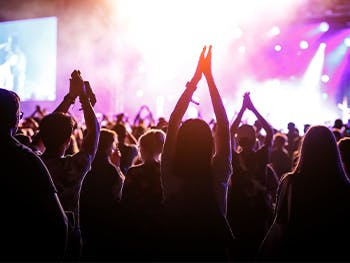 The show, which started filming after the success of Popstars that launched the careers of both Hear'Say and Liberty X, may have only had two series, but it managed to totally change the world of talent shows.

Since Pop Idol graced our screens and provided us with a fierce competition between Will Young and Gareth Gates back in 2002, the ‘Idols’ franchise went on to be adapted in over 56 regions around the world, broadcasted to 150 countries and has had a worldwide audience of over 3.2 billion people.

The franchise has created careers not only for the UK show’s first winner, Will Young, but also incredible success over the pond in American Idol for Kelly Clarkson, Jennifer Hudson, Adam Lambert and Carrie Underwood.

It’s thanks to the success of Pop Idol that the following years experienced a boom of talent shows that wouldn’t have existed without it, including The X Factor, Britain’s Got Talent and The Voice.

We’re looking back at our wide range of graduates who tried their luck on the UK’s biggest talent shows...

Rhydian Roberts graduated from the Royal Birmingham Conservatoire with a BMus (Hons) in 2007, before auditioning and finding fame on The X Factor. The Welsh baritone singer finished in second place on the fourth series of the show, broadcasted in late 2007.

Rhydian has gone on to tour the world thanks to a stream of successful albums and has also taken to the stage in various roles in the likes of We Will Rock You, Grease and Little Shop of Horrors. Back in 2010, Rhydian was also awarded BCU’s Alumni of the Year award.

He is now Artist Manager and Agent to other talent show alumni Lee Mead and Samantha Barks.

Back in 2012, Jason Viet Tien, who studied Marketing, Advertising and PR at BCU, impressed X Factor judges Gary Barlow, Tulisa, Louis Walsh and guest judge Geri Halliwell with a performance of Whitney Houston’s ‘I Have Nothing’.

Jason made quite an impression on the judges, particularly Tulisa who he presented with a rose and declared his admiration for the singer. After receiving a standing ovation from the audience and Tulisa as he ended his audition, the judging panel agreed that Jason deserved to go through to the next stage of the competition.

A BCU student wowed audiences in his native country of Indonesia in 2016, after coming second in an X Factor-style TV talent contest. Gerald Prayogo was studying International Business as part of the Birmingham institution’s International Summer School earlier in the year but had to leave early in order to fly to Jakarta and appear on The Remix.

The Remix saw teams consisting of electronic dance music (EDM) producers paired with already-popular singers to compete live for the top spot through a series of public votes over 11 weeks. Gerald from Jakarta competed with his friend Ken Raka under their stage name KMKZ and were joined by Aqi Singgih, who fronts Indonesia band Alexa, and together they were known as SHOUT!

Capital B, The Voice 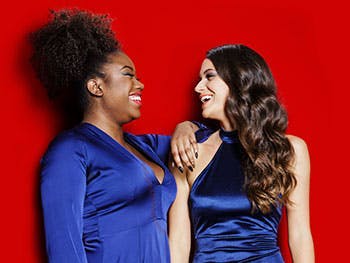 Applied Performance alumni Zoe Hedge and Ebony Wilson wowed the judges on The Voice UK back in 2017. The duo, named Capital B, performed Lauryn Hill and Tanya Blount’s version of Gospel hymn ‘His Eye Is on the Sparrow’ in their blind audition as judges Jennifer Hudson, Sir Tom Jones, Gavin Rossdale and will.i.am initially sat with their backs to them on the ITV programme.

The duo impressed Sir Tom Jones and Gavin Rossdale, who pressed their buzzers to rotate the infamous red chairs and signify their interest in working with Ebony and Zoe. After much deliberation, the undergraduates chose Sir Tom Jones to be their mentor. The talented friends, who met on their first day at BCU in 2014, went on to compete in ‘The Battles’ stage of the competition, but unfortunately didn’t make it through ‘The Knockouts’ round.

BCU graduate Kezia won a spot on will.i.am’s team on The Voice in 2021, after delivering a cover of Sade’s ‘Your Love Is King’ to millions of viewers on the programme. Kezia Johnson has been writing music and singing live in her home city of Birmingham under the stage name Kezia Soul since 2011.

The alumna graduated in 2015 from BCU’s Popular Music programme, delivered in partnership with South and City College. The singer cites a broad range of influences on her music including The Spice Girls, Lauryn Hill, Jill Scott, Erykah Badu, Billie Holiday and Aretha Franklin and has impressed audiences in the city both as a solo artist and with bands playing a blend of neo-soul, hip hop and RnB. Check out Kezia’s latest music here.

Conservatoire graduate and saxophonist Julian Smith finished third on Britain’s Got Talent in 2009. Julian, also known by his stage name Joolz Gianni, finished behind Diversity and Susan Boyle on the show after graduating from the Royal Birmingham Conservatoire in 1991 where he primarily studied the mechanics of the bassoon, before focusing on the saxophone.

Since his BGT success, the alumnus has released several albums and has even performed a duet with Kenny G at the Royal Albert Hall and played for Prince Charles at Clarence House too.

BCU also has lots of other connections to the UK’s biggest talent shows. In 2015, Britain’s Got Talent hosted the search for initial auditions at the Royal Birmingham Conservatoire.

In the same year, members from One Direction, the biggest artists to ever come out of The X Factor after they finished in third place back in 2010, attended a charity ball organised and hosted by BCU students. The team of second-year Fashion, Business and Promotion students organised the Great Gatsby charity ball in London, on behalf of Trekstock, where One Direction’s Liam Payne was accompanied by fellow bandmates Louis Tomlinson and Niall Horan. 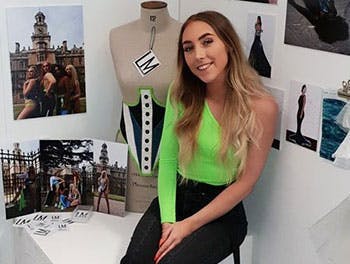 In 2019, Little Mix superfan Lauren McDonnell researched the history of the X Factor winners’ music and styling as part of her final year project at the School of Fashion and Textiles.

Lauren, who had been performing herself since a young age, even experienced being part of a girl group herself and appeared on The X Factor in 2016.

Lauren annotated the lyrics of ‘Strip’, ‘Think About Us’ and hit single ‘Woman Like Me’, as well as working with tribute act ‘A Touch of Little Mix’ to create physical costumes and determine their suitability for performance.