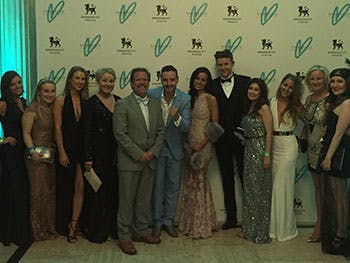 Band members from One Direction, magician Dynamo and comedian Michael McIntyre were among the A-list celebrities who made an appearance at a charity ball organised and hosted by Birmingham City University students.

As part of their course, a team of second-year Fashion, Business and Promotion students at Birmingham City University organised last night’s Great Gatsby charity ball in London, on behalf of Trekstock.

Want to know more?
Get more on the Trekstock One Direction prize

£600 ...per ticket for last night’s event, all profits will go to the students' chosen charity, Trekstock and towards the Graduate Fashion Week budget.

While Harry Styles had some time off in LA, Liam was accompanied by fellow bandmates Louis Tomlinson and Niall Horan at the Great Gatsby Charity Ball.

As part of their ‘Event Management’ module on the Fashion, Business and Promotion course, the second-year students were required to host a live project.

Trekstock is a charity that delivers support and information for young adults with cancer.

At £600 per ticket for last night’s event, all profits will go to the students' chosen charity, Trekstock and towards the Graduate Fashion Week budget.

Graduate Fashion Week is a leading event that celebrates the creativity of students and graduates within fashion, and returns to the Truman Brewery between the 30 May and 2 June.

Liam Payne has teamed up with Trekstock to raise funds, offering fans who donate to the charity to win a chance to meet One Direction on tour. He said:

We can all make a difference to the lives of young adults diagnosed with Cancer. The band and I are working with Prizeo to raise funds for Trekstock’s 5th Birthday.

You can have the chance on winning a trip to London to meet us backstage on our ‘On the Road Again Tour’ 2015 in exchange for a small donation to the charity.