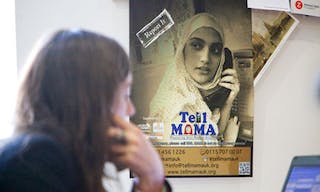 Commissioned for the organisation ‘Tell MAMA’ (Measuring Anti-Muslim Attacks), senior lecturers of Criminology, Imran Awan and Irene Zempi (Nottingham Trent University) have put together a research report on cases of anti-Muslim hostility. This report was created to highlight the trauma of the victims and emotional and psychological impact that the attacks have on Muslim communities. In the aftermath of a terrorist attack, Muslims are targeted and blamed, so this report aims to educate people to tackle anti-Muslim hatred.

This investigation was carried out by conducting 20 anonymous interviews with British Muslims who have experienced online and offline abuse. The interviewees were made up of eleven females and nine males who were Asian, White British, Somalian, and Libyan, aged between 20 – 30 years old.

This research report aims to:

The findings of this report revealed that women were the main victims of attacks, due to their Muslim dress, and that white males were the main perpetrators of the attacks. In a lot of cases they found that online abuse threatened offline abuse, such as threatening to come to their home. One participant even said that the abuse that has threatened his family has made his daughter ‘suicidal’. Another said that her Muslim friends had been punched, verbally abused and had their houses burnt down after the Lee Rigby incident.

They found a clear link between a terrorist attack and a spike in attacks and abuse directed at Muslims online and offline. There was also a link between when the media (eg The Daily Mail) gave inflammatory reports, for example one man was called a ‘paedo’ and lost his job after the Rotherham scandal.

Imran Awan said: "This research reveals worrying levels of fear and intimidation experienced by many Muslims, compounded by a lack of support from the wider public when facing physical threats in the real world and an absence of tough action from social media platforms at the abuse people are receiving online."