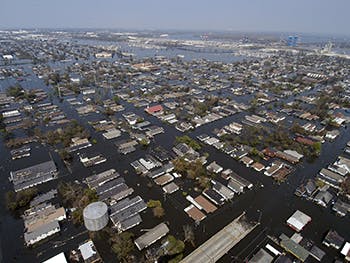 Researchers within Birmingham City University’s Water, Environment and Communities group have been conducting valuable research on building stronger flood resilience, both on a regional and national scale.

The Centre’s Taiwo Adedeji, David Proverbs and Hong Xiao have co-authored a new journal article on making Birmingham a flood-resilient city. Over the years, Birmingham has experienced extensive flooding that has caused significant physical and psychological damage. “Flooding and flood risk remains a global issue, and a threat to cities around the world,” says David. “Over the past three decades, 100 million people have been affected by floods annually. Furthermore, forecasts show that these events will increase in frequency and severity.”

The journal article - which also includes the insight of Paul Cobbing MBE, Chief Executive of the National Flood Forum – looks into the current challenges and opportunities of flood risk management in Birmingham. “We adopted the ‘flood resilience circle model’, which helped provide a clear structure to our evaluation,” David says. “The approach considered four phases to flood resilience – prevention, preparation, response and recovery. We then included contemporary features such as the need to be adaptive and the significance of social capital.”

As well as the journal article, Taiwo, Hong and David are also conducting research into the impacts of flooding on businesses. While some commercial properties have developed a level of resilience, many are still susceptible to flooding. This research will seek to identify exemplars of commercial properties that have been adapted to flood risk, as well as  a survey of property owners to establish how property-level flood risk adaptation might be successfully implemented.

“I am hoping we can work with stakeholders in the city to help improve resilience to future flooding events,” David says. He also feels that the research the Centre is conducting could have global benefits. “I believe that the approach we have developed here could be used as a reliable means of evaluating flood risk in other cities, not only in the UK, but also internationally.”