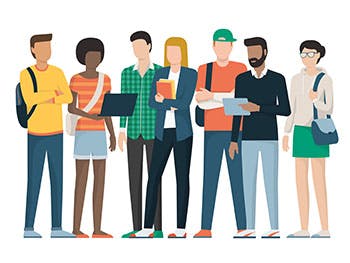 Birmingham City University’s postgraduate researchers ensure their work informs, influences and changes lives both in the West Midlands and beyond. From providing much-needed data about teen sexting and sexual assault, to ensuring Birmingham’s young people are a key part of the city’s technological advancements, our PhD students’ research is ensuring youth culture in the city is changing for the better.

Birmingham is set to become a smart city, one that uses information and communication technologies to increase efficiency, share data and improve the quality of services. However, while smart cities can offer a host of technological and societal benefits, how it will benefit and work with people is often overlooked. In particular, young people are marginalised when it comes to the planning and design of cities, which results in a severe lack of both representation of young people’s ideas and youth-orientated spaces for them to thrive. Furthermore, there has been considerable distance between young people and city policymakers, creating additional social and cultural equalities.

There are many more issues young people face, most notably in the area of health and wellbeing. There is still difficulty and reluctance for teenagers to speak out if they have been a victim of sexual assault, with support currently not being adequate enough. Meanwhile, West Midlands Police are regularly contacted about issues regarding teen sexting, but there is a distinct lack of in-depth data regarding the topic.

Simeon Shtebunaev has begun conducting research into young peoples’ roles in smart cities. “Recent surveys from Beatfreeks have highlighted there is a lack of opportunities for young people to participate in the public life of the city,” he says. “Testing the smart city policies in relation to youth can provide an overall test for how well the policies aim to involve citizens in the process. Planning policies in Birmingham often ignore the young, so understanding the spatial needs of this group is a key aspect of my work.”

Another PhD researcher inspired by Beatfreeks is Jill Robinson, who has worked with the Brum youth collective to investigate the role of big data in public sector policymaking.

Tamar Shiboleth was encouraged to research sexual assault in teenagers after a career in social work. “I have witnessed first-hand the difficulties teens have when it comes to finding the right help,” she says. “I am focusing on the experiences teens have following sexual assault.”

Similarly, sexting has also become a prominent concern in Birmingham schools. “I have spoken to teenagers, teachers, parents and authorities to bring all of these voices together,” says researcher Andrea Anastassiou. “It’s an uncomfortable topic, but this has led to a number of misconceptions within the area.”

All four researchers are hoping for their projects to make a positive contribution to young people. “Young people have historically been seen as a transient group, that they are inexperienced and subsequently their opinion holds less value,” Simeon says. “I hope for them to be seen as an important resource and as citizens in their own right.”

Jill agrees it’s time for these voices to be heard. “Encouraging young people to identify their concerns based on their data gathering may attract policymakers’ attention,” she says. “It could lead in a shift in the balance of power between marginalised young people, and those responsible for shaping and implementing public policies.”

Andrea’s work with Year 10 and 11 students, among others, has proved fascinating. “The main thing I have taken away is how much pressure young people are under,” she says. “I hope that having an investigation into sexting, where everyone gets an input, will result in a greater understanding of the experiences of young people.”

Tamar also has high hopes for what her project could achieve. “I hope my research will become valuable to direct practice,” she says. “The goal is to find out how sexual assault support services can become more accessible for teens, and give them the support they need and deserve.”