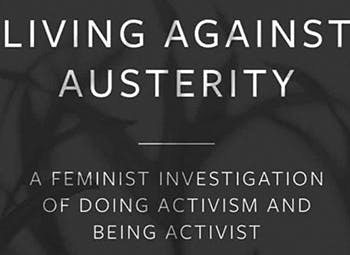 A Senior Lecturer in Health Research has released a new book and accompanying virtual launch event, highlighting female engagement with austerity and activism.

Experiences of women within austerity and activism

Dr Emma Craddock, based within the Faculty of Health, Education and Life Sciences (HELS), has just released Living Against Austerity: A Feminist Investigation of Doing Activism and Being Activist.

The book, published by Bristol University Press, is based on Emma’s research into anti-austerity activism in Nottingham.

“I discovered some important findings about what facilitated and hindered political participation, the gendered experiences of women within local activism, and how the activity identity was gendered,” Emma explains.

“The research built up an in-depth picture of the complexities of protesting against austerity and how alternative politics of resistance can sometimes unwittingly reinforce dominant power structures in society.

“At the same time, it also revealed positive, enabling and empowering elements of doing activism which are often overlooked such as the strong community that is built up through shared experiences of activism and the emphasis placed on empathy and care in opposition to an individualist society.”

“I wanted to write the book in order to spread these findings and to hopefully provide insight into anti-austerity activism in a way that acknowledges the strengths of activist culture but also highlights areas for change.”

A positive influence for women

Emma hopes her book will resonate in a number of areas.

“I hope it will invite readers to pay closer attention to aspects of life that we typically take for granted,” she says. “I want people to read and then look more closely at areas of social life, and consider experiences through a critical feminist lens.

“I also hope that the book will serve as a positive influence for women who have not felt ‘good enough’, as well as showing women that they are not alone in their feelings of frustration surrounding political participation.”

Emma harbours ambitions that the book to resonate in wider areas, too.

“I aim for the book to have a wider positive influence on activism by highlighting the strengths and values of anti-austerity activism.

“While it is important to make visible the hidden, negative elements of activist culture such as activist shaming and women’s guilt - what I call the ‘dark side of activism’ in the book.

“I also want to emphasise that there are a lot of positive, empowering and inspiring aspects of anti-austerity activism that should be celebrated.”

To celebrate the book’s release, Emma is also a hosting a virtual launch event on Tuesday 10 November. Free to attend, the event will see Emma discuss her work in greater detail.

“I’ll speak about the emotional dimensions of political participation, including what motivates and sustains protest, and the constraining factors of negative emotions and gendered barriers associated with activism,” Emma says.

Emma, who is part of the Family, Gender and Health research cluster in HELS, feels her new book compliments the cluster’s research greatly.