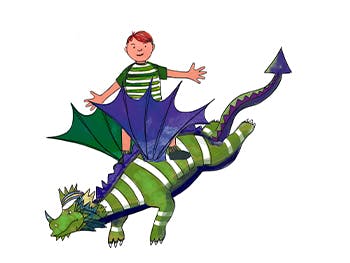 Health experts from Birmingham City University and the University of Nottingham have teamed up with an author, illustrator and an East Midlands orchestra to produce a new book, animated film and songs to help children with eczema cope with the condition.

The Dragon in My Skin

The Dragon in My Skin is a story aimed at children aged 5 to 7 with eczema. It forms part of the National Institute for Health Research funded Eczema Mindlines study, which Fiona Cowdell, Professor of Nursing and Health Research at Birmingham City University leads. Eczema Mindlines is committed to improving the treatment and management of the skin condition, which affects around 20% of children in the UK.

Through a programme of research and co-creation work with children living with eczema, healthcare professionals and other interested groups, Fiona developed five key messages about eczema treatment and self-care for children, which she was keen to share widely in an easy-to-understand, attractive and accessible format.

Writer Hazel Gould and illustrator Jay Nolan-Latchford – an old school friend of Fiona – adapted the key messages about eczema care into words and pictures, which evolved into The Dragon in My Skin story. The mythical creature at its centre acts as a metaphor for the condition with the moral of the tale being that rather than fighting the ‘dragon’ living within their skin and making it angry, children become its friend and so live a happier life.

Dr Stephanie Lax, a colleague of Fiona’s from the Centre of Evidence Based Dermatology at the University of Nottingham, suggested working with Derby based professional orchestra and education charity Sinfonia Viva to share these messages and helped develop the artistic outreach concept, incorporating feedback from the Centre’s Patient Panel.

As a result, children with eczema and their families joined a series of online workshops with writer Hazel Gould, songwriter Abimaro Gunnell and the Sinfonia Viva creative team to compose a series of songs based on their own experiences of the condition and the dragon story which they have recorded alongside professional players from the orchestra.

Eczema can be a difficult condition to live with. It can make the skin itchy and sore, so much so in fact that it can seriously disturb sleep and concentration. Children can also feel embarrassed and self-conscious about having eczema so we wanted to help explain to them in a fun, simple-to-follow way how to deal with the condition.

We struck upon the idea of a dragon living within the skin – they are scary, scaly skinned monsters after all – as we thought this was something children could relate to. We hope they’ll easily grasp the messages about looking after their ‘dragon’ and learning to live with and treat their eczema.
Fiona Cowdell

Fiona, Stephanie and the team have also worked with Alison Pemberton Smith and colleagues from Birmingham City University’s School of Education and Social Work to develop an accompanying collection of curriculum linked resources and a workbook, all designed to reinforce the key messages about self-care to those who have eczema, and improve awareness of the condition among those who don’t. These will be free to access for Key Stage 1 teachers. A hard copy of The Dragon in My Skin book is also being sent to the 800 local primary schools that work in partnership with Birmingham City University.

Ten-year-old Arielle Carty from Birmingham, who has had eczema from an early age, was among the participants in the project.

Arielle used to be very self-conscious when her eczema was at its worse so I was keen for her to get involved in this project to show her that she is not the only one who has this condition. She really enjoyed helping to write the songs and her confidence has grown.

I am so glad that the book and other resources will now be shared in schools to raise awareness among children of what some of their friends are going through and to hopefully encourage more parents to talk about this and share experiences of what treatments have worked for their children.

This has been a wonderful healthcare and artistic collaboration and we are delighted with the outcomes. Hearing the young people’s voices through the songs and animated film is incredibly powerful as the words and lyrics are inspired by their personal experiences and emotions about living with eczema.

Full information and KS1 resources for The Dragon in My Skin can be found at Birmingham City University’s website. The animated film created by artists Darius Powell and Abbie Canning, and accompanying songs can be viewed on YouTube.