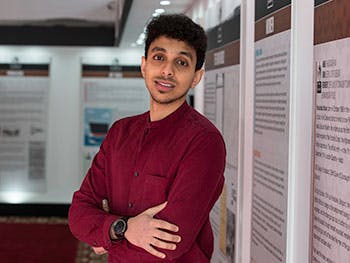 Landmark research undertaken at Birmingham City University has been shortlisted for the Times Higher Education (THE) Award’s Research Project of the Year in the Arts, Humanities and Social Sciences category.

The research, carried out by Dr Islam Issa in the School of English, examined thousands of personal letters, historic archives, regimental diaries and census reports to find new data, which has shown twice as many Muslim soldiers (885,000) fought for allied forces in WW1 than originally recorded (400,000). He found that Muslims involved in the war effort came from as far away as Algeria, Morocco and Tunisia, and that at least 89,000 Muslims were killed fighting for Allied forces. The research brought to light previously unseen or unreported soldiers' letters, diary entries and photographs, which have now been reported widely.

Dr Issa’s work has increased cross-cultural and cross-faith awareness at local, national and international levels, as well as having a major impact in raising public awareness of the contribution of Muslim soldiers. An exhibition titled ‘The Stories of Sacrifice’ was curated by Dr Issa for the British Muslim Heritage Centre. The exhibition was used to disseminate the research to the public and was visited by 29,000 people in its first two years, as well as high profile visitors such as Prince Charles, Chief of the UK Army General Sir Nick Carter and Mayor of London Sadiq Khan.

The impacts of Dr Issa’s work have been wide ranging, from inclusion of the research in public school history lessons to a mobile exhibition in the Greater Manchester Police Headquarters following the Manchester Arena attacks in May 2017. The Force acknowledged the importance of the exhibition in helping its non-Muslim staff deal with the period, and how education about Muslim contributions helped combat racial profiling.

This research has already won awards and received some significant coverage, but to be recognised in the Times Higher Education awards really feels like a feather in the cap. It continues to prove the kind of impact that public-facing research can have.

Islam has a history of high impact research and has also been awarded for his discovery of John Milton’s influence in the Middle East.

Dr Issa’s research project has been nominated in the Arts, Humanities and Social Sciences category. THE Awards are a yearly celebration of the best outcomes in higher education and are widely recognised as the Oscars of the sector. The finalists will be announced at the awards ceremony on Thursday 28 November.