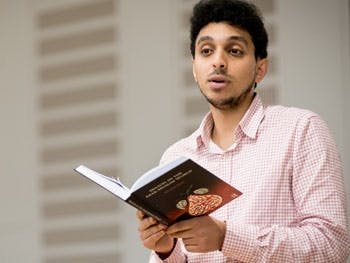 A Birmingham lecturer has been nominated for two prestigious awards after his research uncovered previously unknown details about the Muslim contribution to World War One, and poet John Milton’s influence in the Middle East.

Dr Islam Issa, Lecturer in English Literature at Birmingham City University, has been named on the shortlist for both the British Muslim Awards and the Muslim News Awards for Excellence in recognition of his discoveries.

Dr Issa was tasked with curating an exhibition for the British Muslim Heritage Centre highlighting the role Muslim and Indian soldiers played in the First World War.

He trawled through thousands of personal accounts, letters and artefacts from soldiers involved in the war effort, to create the Manchester based exhibition titled Stories of Sacrifice,the first dedicated to the topic.

Among his findings Dr Issa revealed that twice as many Muslim soldiers fought for the Allies than previously thought, and the role that football played for men involved in the conflict.

The English Literature Lecturer also released his first book in 2016, Milton in the Arab Muslim World, focussing on how the work of John Milton is viewed in the Middle East.

The book found that the 17th Century poet may have been influenced by the Quran and that his most famous work, Paradise Lost, had an impact on the uprisings of the Arab Spring.

Dr Issa said: "I feel honoured to be shortlisted for two prestigious awards.

"It's also heartening because I always intended for the public to engage with the ideas and findings that I've been lucky enough to make.

So the bigger honour is knowing that the public has welcomed these findings and that they might be having a wider impact on how we think history and literature can build bridges between cultures.
Dr Islam Issa

The nominations come in the categories of Services to Education (British Muslim Awards) and Excellence in Community Relations (Muslim News Awards). The award ceremonies take place on January 25 and March 27 respectively.

Issa's book has already won the annual Outstanding First Book Award from the Milton Society of America and according to one review, "makes a truly original contribution to knowledge".

His Manchester exhibition was part of Sadiq Khan’s first visit outside London as Mayor, and has been acclaimed for its social impact as a means of bringing people together and highlighting the historic links between Muslims and non-Muslims.

Issa has also represented the British Foreign Office across the world as a special guest speaker including at the International Arab Film Festival and as the only UK representative at the EU Writers’ Meeting last year.