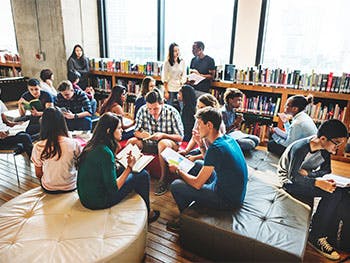 A study of Prevent Duty in UK higher education (UKHE) has highlighted significant issues around its effectiveness and implementation.

A Disproportionate Response is the latest report from the Desecuritising Higher Education project at BCU, and details the wide-ranging impact the Duty has had across the sector and the uncertainty both staff and students have about its place in higher education.

The project, funded by the Joseph Rowntree Charitable Trust, aims to investigate the Prevent Duty within UKHE to establish how it has been implemented across the sector and explore the experiences of those impacted by it.

Implemented in 2015 as a measure to prevent people from being drawn into terrorism, the Prevent Duty has since received criticism from several organisations and calls for an independent review, which the government committed to in 2019.

The research consisted of lecturer interviews, student focus groups, a review of 158 higher education institution websites and freedom of information requests, which allowed the team to identify the impact of the duty.

FOI requests showed that despite the inception of the Duty, the number of referrals made based on the suspicion of radicalisation remained incredibly low.

Only 16% confirmed they had made a referral to Channel, the government agency that progresses claims of radicalisation, while 64% confirmed no referrals had been made and 19% declined to comment due to security concerns.  Of those institutions that had made a referral only twenty-five instances could be confirmed, a figure that demonstrates just how rare these are within the sector.

Interviews with academics across the UK revealed that the Duty introduced extra layers of responsibility that have expanded bureaucratic processes and increased managerial oversight.

Academics also expressed scepticism about the ease and practicality of identifying the signs of vulnerability to radicalisation.

In addition to practical concerns, both staff and students were divided on the place of the Duty in higher education, citing issues relating to the learning environment, freedom of expression, surveillance of populations and trust between students and staff.

Our report has drawn attention to what we consider to be significant issues with the Duty in higher education and we hope that the findings and recommendations are taken on board as part of an evaluation that is genuinely independent and free from political influence.

Recommendations for the future

The report outlines several key recommendations, the most significant of which is that the government delivers the promised independent review of Prevent and that such a report addresses the issues around implementation.

Other recommendations include detaching student wellbeing from counter-terrorism in the form of the Duty and instead ensuring that mental health and student support services are adequately funded and resourced.

The report also suggests that staff and student voices should inform future reviews of the Duty:

Find out more about the Desecuritising Higher Education project and read the full report here.