Criminology experts have conducted extensive research into the social, cultural and political factors behind homicide, resulting in a more accurate and expansive representation of the crimes in mainstream media.

Distinguished researchers within Birmingham City University’s Criminology team sought to provide a more detailed, nuanced and correct portrayal of the factors behind homicide, particularly in mainstream media where it had been more short-sighted.

After conducting extensive research with offenders, established victim groups, prison officials and many other stakeholders, the team were able to establish more comprehensive reasons leading to such brutal crimes.

Their findings have helped create and influence commercially and critically acclaimed television shows, unearthing new factors and presenting the influence of contemporary formats, such as social media.

Inspiration for the project stemmed from the misrepresentation of homicide in crime television programmes. Often, these shows explained homicide as the result of inherent evil or psychological defects.

However, the researchers at BCU knew that there were deeper social, cultural and political forces that enabled such behaviour, a significant departure from the orthodox approach that focuses upon the psycho-social development of individual serial killers.

Furthermore, the team were also keen to examine other areas of homicide – such as contract killing and the influence of social media – to shine a light on hitherto unknown aspects of homicide.

How has the research been carried out?

In order to achieve this, the researchers conducted semi-structured interviews with victim groups, observations of a serial homicide police investigation and qualitative content analysis of official enquiries, police records and court records.

It became the first UK study to approach serial homicide from a victim perspective and formed part of a vanguard of enquiry focusing upon victim socio-demographics instead of offender motivation, which had characterised much of the earlier studies.

With the rise of social media, research then turned to examining the significance of these sites in homicide. It became the first study of its kind, analysing 48 cases throughout the world.

It is now the highest scoring output to date in the peer-reviewed scholarly journal it was published in.

The research team then became the first to identify cases of contract killing in Britain during the rise of neoliberal political economy. BCU’s researchers conducted interviews with a range of stakeholders – including newspapers, offenders and prisons - to develop the first typology of British hitmen.

The research has introduced innovative, more comprehensive understandings of homicide and multiple homicide, informing the quality of content in many documentaries and drama television programmes.

By conducting this study, there has been a big impact upon culture, creativity and society, with mainstream media – such as Netflix, CBS and Emporium Productions - providing a more accurate and expansive portrayal of homicide.

Thanks to the research, these programmes now move beyond focusing on the individual offender to instead encompass the social and political-economic contexts of the homicides they cover.

One such show was the critically lauded Jack the Ripper – The Case Reopened, which applied BCU’s research into victim groups to the infamous 19th-century killings.

Furthermore, the team’s fresh insight into the social media influence on homicide helped provide the concept for the highly successful Netflix show Click for Murder, which showcased ten homicide perpetrators that had used social media to aid their crimes.

They also found that the public’s usual conceptualisations of British hitmen – expensive, underground, elite – were false. Instead, the reality was much different and these killers operated at a more public, open and relatively cheap level.

Birmingham City University's hub for everything related to the Research Excellence Framework.

Liz is passionate about making a difference to the lives of those affected by violence and challenging the myths and stereotypes around crime. Being an academic enables Liz to achieve these aims by doing research that sheds further light on the darkest elements of society and by training the criminal justice professionals of the future.

David's work concerns serious violent crime – especially murder and serial murder. Having worked with a number of British serial killers and on police investigations related to linked murders, David has used these experiences within his research and teaching, most notably within the Applied Criminology module on the BA Criminology course. 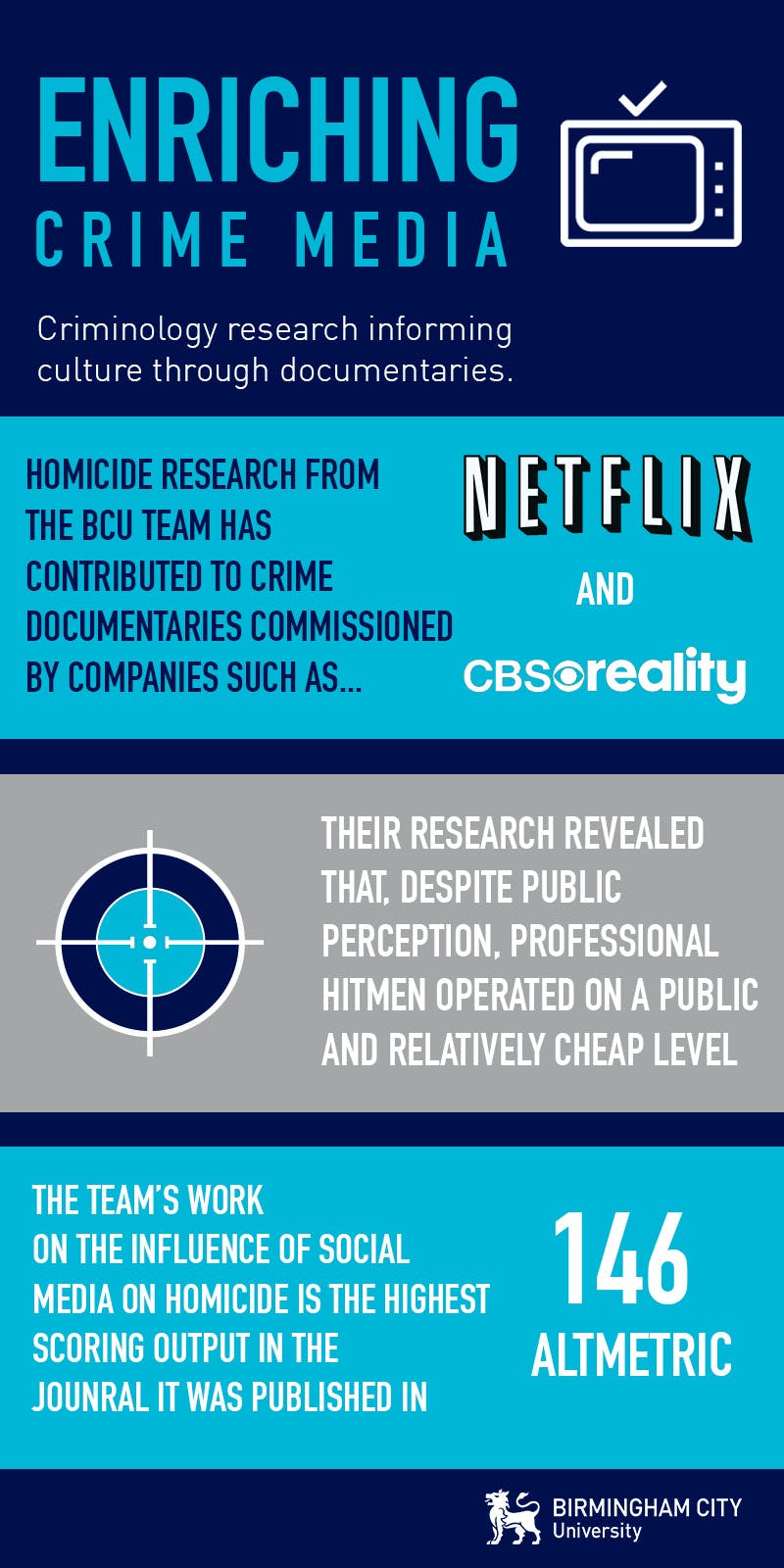