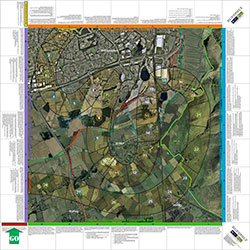 Maximising the Impact of Games as Effective Participative Tools: The Rufopoly Resource Kit

Rufopoly is a participatory-learning board game, which enables players to undertake a journey through a fictitious rural urban fringe (aka peri-urban region) called RUFshire, answering questions and making decisions on development challenges and place-making. The answers then inform each player's vision for RUFshire.

The encountered questions are determined by the roll of a die and are based on primary data collected for a RELU project (2010-2012) about Managing Environmental Change at the Rural Urban Fringe.

Rufopoly has been used extensively in early stages of projects and plans such as the pioneering Greater Birmingham and Solihull Local Enterprise Partnership (GBSLEP) spatial plan and has been used by government, EU project groups, local authorities, business, community groups, universities and schools. It has exposed audiences to issues associated with the delivery and trade-offs associated with planning and environmental issues at the fringe but crucially without the use of complex jargon.

We believe that the full potential and impact of Rufopoly has yet to be fully realised. There are several reasons for this:

1. Rufopoly was developed towards the end of our RELU project as an unplanned output for a conference run by RELU in 2011 on 'Who Should run the Countryside?'. Its success prompted its inclusion as an output.

2. There were insufficient funds for it to be successfully tested and integrated with policy and practice communities to maximise its utility as a learning tool as this was never the original intention of the project.

3. It is currently presented as a one size fits all board game of a hypothetical place. More time is needed to explore the potential of Rufopoly to become a generic platform for stakeholders wishing to develop their own versions of the tool to meet their own needs and to fill a widely recognised gap in the effectiveness of participatory tools for improved decision making.

This knowledge exchange project addresses these deficiencies by drawing together the shared knowledge and previous experiences of designers and users of Rufopoly. This informs a series of interactive workshops in Wales, England and Scotland to identify how this kind of game-format can be enhanced into a more effective and multifunctional tool. This will help extend and embed the impact for a range of policy and practice partners in the form of a Rufopoly Resource Kit.

By working collaboratively with end users we can identify how Rufopoly can be reconfigured across different user groups and organisations in tune with their agendas and needs.

Watch a game of Rufopoly being played

Watch 'Playing around in the urban fringe'