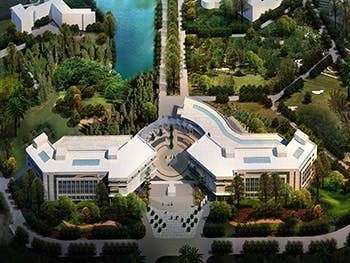 Birmingham City University has become one of just a handful of global institutions to be given approval by the Chinese Government to set up a jointly run higher education institute.

The partnership with Wuhan Textile University will see the Birmingham Institute of Fashion and Creative Art open to a new intake of 300 students in September 2016. Located in Hubei's capital city, it will be the first non-profit Chinese-foreign cooperatively run educational institution in the province offering undergraduate programmes.

Over the next seven years more than 3,500 students are expected to study at the Institute in Wuhan, which will offer degrees in subjects including Arts, Design and Media.

Courses will be taught in both Mandarin and English, with students being equipped with internationally recognised UK Bachelor's degrees. Students will also be given the option to spend half of their studies in the UK, studying at the University's Birmingham brand new City Centre Campus.

The University is one of just 63 universities across the world to be given the green light to set up a jointly run higher education institute in China. Birmingham City University joins such prestigious institutions as Duke University, the University of Michigan and New York University in being able to confer degrees in China. At least 30 other UK universities are believed to have bid unsuccessfully for similar approval this year.

Wuhan Textile University is already recognised for its creative arts and has been crowned China's top fashion university for the last 15 years. Furthermore, Wuhan is ranked 31 globally for fashion and places within the top five in Asia, according to the 'Textile Fashion' journal.

This alliance between Birmingham City University and Wuhan Textile University draws on our shared academic specialisms – including fashion, art and design – and the heritage of the two host cities, both of which played pivotal roles in the industrial revolutions that transformed the fortunes of the two countries.
Professor Bashir Makhoul

"Opening this new facility will not just give us the chance to expand the University but will also allow thousands more students to benefit from world-class facilities and teaching.

"English degrees are internationally recognised as among the best in the world and those who study there will have the benefit of this but will also have the flexibility to choose whether to study their whole degree in China or spend part of their time in England."

"The Birmingham Institute of Fashion and Creative Art will welcome students from China and abroad, and it will embrace an innovative teaching approach to equip students with an international vision."

The establishment will officially open its doors to students next year in a newly refurbished 10,000m2 building featuring the latest facilities for 3D design and media production.

The news comes on the back of a major investment programme at Birmingham City University, which is well underway in developing a £260 million city centre campus, including work on a £46 million new home for its Birmingham Conservatoire.

Applications are now being accepted for the role of Assistant Dean of BIFCA to lead the development of this new venture.