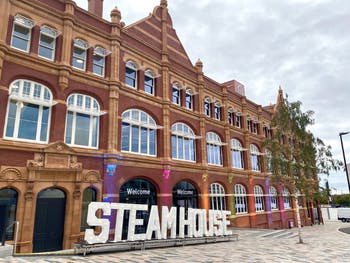 Home to a multi-disciplinary community of entrepreneurs, businesses, academic researchers and students, STEAMhouse - located in the University’s City Centre campus - offers a wealth of support to companies of all sizes to boost growth through innovation to address commercial and societal challenges.

Birmingham City University Vice-Chancellor Professor Philip Plowden; Anita Bhalla OBE, Interim Chair of the Greater Birmingham & Solihull Local Enterprise Partnership; and Mark Hopton, FCA, Pro-Chancellor and Chairman of the University’s Board of Governors were among the speakers at the event.

STEAMhouse is central to Birmingham City University’s commitment to spearheading the STEAM agenda, which places the Arts at the centre of STEM (science, technology, engineering and mathematics) disciplines.

STEAMhouse will play a key role for growth and innovation across Birmingham, the region and beyond.  We are proud to be pioneering the STEAM agenda as part of our mission to transform the lives not only of our students, graduates and the communities we serve, but also the wider economy.

Joanna Birch, Director of Innovation, Enterprise and Employability at Birmingham City University, said: “Our new STEAMhouse is a building inspired by Arts and STEM, where the past meets the future, in which connectivity and collaboration are built into the heart of the design to support, empower and inspire every user to respond to a need in a superbly equipped, professional and inviting environment.”

The event provided a glimpse into the future of entrepreneurship and the technology that is driving creativity and innovation across different sectors. Guests were able to meet interactive robot dogs Eric and Gizmodo, experience how virtual reality (VR) is changing the future of art thanks to a special demonstration from VR artist Rosie Summers – and learn more about the hardware that powers immersive exploration and extended reality projects.

Supercharging innovation across the West Midlands and beyond

STEAMhouse is the result of a two-year, £70 million renovation and expansion of the listed and once derelict Belmont Works Factory in the city’s Eastside.

It is already yielding benefits, with dozens of businesses already located at its incubator and accelerator, utilising co-working and meeting spaces, state-of-the-art production and prototyping facilities - alongside a digital hub connecting users with future technologies such as AR (Augmented Reality), VR (Virtual Reality), and 5G testbeds and trials.

STEAMhouse will also be the location of Birmingham City University’s STEAM conference taking place between 18 and 20 October 2022, featuring practitioners from around the world highlighting and sharing new research practice.

The University first launched STEAMhouse as a pilot back in 2018 in its original home in a converted warehouse in Digbeth, Birmingham.

Following the pilot’s success, in February 2020 the University embarked on the next phase of STEAMhouse, working with construction firm Bowmer + Kirkland to dramatically transform the former Belmont Works Factory, breathing new life into an important historical city landmark.

The new STEAMhouse building will also be the new home of the University’s School of Computing and Digital Technology from January 2023, providing access to a range of facilities and teaching spaces for students, alongside opportunities to collaborate with businesses using the facility.

A stone’s throw from the planned new HS2 rail station, STEAMhouse retains much of the Belmont Works’ original character and its iconic façade, which dates back to 1899.

The renovation was funded by a number of partners, including £14 million from BEIS, and £1 million in Local Growth Funding and £2.4 million Enterprise Zone funding from the Greater Birmingham and Solihull Local Enterprise Partnership (GBSLEP). The new state-of-the-art facility was also developed in partnership with Birmingham City Council, Eastside Projects, and Arts Council England.