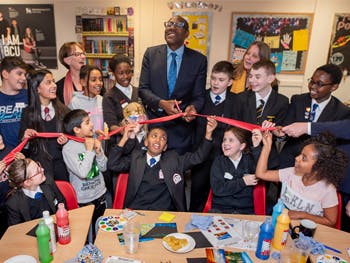 Sir Lenny Henry has officially launched a new £1.2 million education hub in the north of Birmingham aimed at getting thousands more young people into higher education.

Birmingham City University has joined forces with national education charity IntoUniversity to open the new learning centre in Kingstanding, which is expected to welcome over 1,000 students through its doors each year once established.

The hub, based at the refurbished Maryvale Community Centre, was formally launched at a special event in front of assembled guests made up of families accessing the centre, academics and VIPs.

IntoUniversity Birmingham North will have a focus on the arts, the first IntoUniversity centre to do so, and will stimulate children’s understanding and enthusiasm for a wide range of subjects.

The programme aims to ensure more young people in the area go on to study at university, with only 17.8 per cent of residents currently entering higher education.

Opening the centre Sir Lenny Henry, Chancellor at Birmingham City University, said: “I’m thrilled to be here in Kingstanding because I really, truly believe that universities shouldn’t be closed off from the communities in which they are situated.

“Through this centre, its staff, and its volunteers, young people will be able to develop the skills to help them get to university – and to seek out the opportunities which will help them make the most of all that potential they have.

It took me a while to get around to going to university, but I loved it so much that I went and got a Master’s and a PhD too. It just shows that whatever your age, background or circumstances going to university is an absolutely fantastic thing to do.
Sir Lenny Henry

“And now I’m the Chancellor of Birmingham City University – a position I would never have imagined I’d hold when I was a boy growing up in Dudley.”

Five full-time members of staff have been recruited to the centre to deliver after-school Academic Support sessions to Primary and Secondary school children, aspiration-building workshops in partnership with local schools, and a mentoring programme with university students and corporate professionals.

The project aims to have a transformative effect on the community by increasing access to higher education, and enhancing employment levels.

Subjects, including those focused on the arts, will be taught by trained Education Workers, preparing young people for life in higher education and their future careers.

The creative industries are estimated to contribute £100bn to the UK economy, meaning that equipping young people with access to higher education in this area will also provide an additional catalyst for economic development in the West Midlands and beyond.

The new centre, which is the first of its kind to be opened in Birmingham, will deliver services through a mixture of one-to-one and group tuition, as well as hands on educational experiences.

Students are able to access the centre between Monday and Thursday for after-school Academic Support, which is geared towards Primary students on Tuesdays and Wednesdays and Secondary students on Mondays and Thursdays. Workshops with partner schools run during the daytime throughout the week.

Dr Rachel Carr, Chief Executive and Co-Founder of IntoUniversity, said: "We are delighted to have opened our first centre in Birmingham in partnership with Birmingham City University.

“IntoUniversity centres are based in the heart of the community to give local young people the best chance of attaining a university place or another chosen aspiration.

“We are so grateful to Birmingham City University and our partner schools and the families of our students for all their support in getting the centre up and running.”

The charity forms partnerships with universities to provide after-school Academic Support, mentoring and aspiration-building workshops and trips, working closely with local partner schools to boost students understanding of key topics or subject areas as well as their future options.

Birmingham is the 31st IntoUniversity centre to open in the UK, following the launch of centres in areas such as Brixton, Leeds, Manchester and Coventry.

Significantly more students attending IntoUniversity centres progress to higher education than the national average, as well as being more likely to go on to further education, apprenticeships or  employment.