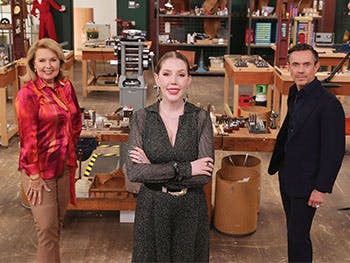 Birmingham City University’s School of Jewellery will once again provide the backdrop for the BBC’s popular talent seeking programme All That Glitters: Britain's Next Jewellery Star as the show returns to TV screens for its second series on Thursday 25 August 2022.

The six-part series, to be aired on BBC Two, fronted by comedian Katherine Ryan, was filmed in its entirety in the facilities of the University’s historic School of Jewellery with many staff and students also playing critical roles behind the scenes to support filming.

The popular programme debuted last year when the School of Jewellery also provided the setting for aspiring jewellers competing against each other for a glittering career in the industry.

The new series, the first episode of which premiers on BBC Two at 9pm on Thursday 25 August 2022, will likewise see a fresh batch of talented jewellers battle it out over precious metals and gemstones to prove they’re the next big name in jewellery.

From spinner rings to mis-matched earrings, engagement rings to hairpins, each show sees the jewellers face two-real world challenges: the Bestseller, where they are tasked to design the latest must-have piece that everyone will want; and the Bespoke, where they create a one-off piece for some very special clients from all walks of life, including a celebrity guest seeking a necklace for a red-carpet occasion.

Judging the jewellers’ work are two of the biggest names in the business, Shaun Leane and new-to-the-workshop Dinny Hall, and it’s up to them who will be named jeweller of the week and who will be heading home until they whittle it down to the winner in the final week.

Birmingham City University’s acclaimed School of Jewellery, located in the city’s historic Jewellery Quarter, provides the perfect backdrop for the series. Founded in 1890, it houses traditional style workshops and exhibition space, and over the years its graduates have gone on to work for prestigious industry names such as Tiffany’s, Tag Heuer, Cartier and De Beers, with designs having been used in collections for retailers ranging from Argos to Harrods.

Andrew Howard, a lecturer on the Jewellery & Silversmithing Design for Industry course at Birmingham City University’s School of Jewellery, played a key role as a consultant to programme producers.

We are beyond thrilled to have once again welcomed back the production company, Katherine and the judges and to have the opportunity to play an important part in this brilliant programme.

Our School of Jewellery has been the setting for talented jewellery makers to master their craft for well over a hundred years therefore it feels very apt that it is the stage chosen to showcase the skills of the next generation of jewellers.

It’s great that the show shines a spotlight on our industry, and I know it’s proved popular with viewers. I’m sure audiences will be impressed again at the talent on display this year.

The news comes as a graduate and two current student from the University’s School of Jewellery spoke of their pride at designing the official medals for the Birmingham 2022 Commonwealth Games.

Further information about the television programme is available on the series website.