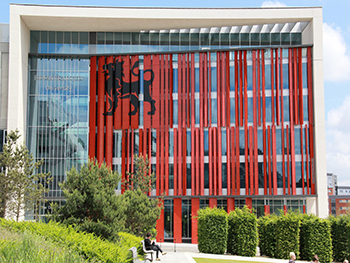 Thousands of students have started a new term at a state-of-the-art £63 million University building which has been unveiled in the heart of Birmingham.

The overhaul has included the restoration of a historic Victorian pub, which had stood derelict for eight years, keeping many of its original mid-19th century features intact.

Professor Cliff Allan, Vice Chancellor at Birmingham City University, said: “In what has been a truly exciting period for this city it is great to be able to add another major landmark that will significantly contribute to the lives of thousands of students by giving them a world class facility in which to study, learn and socialise.

“We have already seen the opening of the renewed New Street Station and Grand Central but with the planned Midland Metro extension and the arrival of HS2, the Eastside of the city centre has an equally significant role to play in Birmingham’s future.

This building will give our students even better facilities to not only gain the valuable education they need, but to prepare them for the world of work after graduation.
Professor Cliff Allan

More than 300,000 bricks and 10,000 cubic tons of concrete have been used to create the Curzon Building.

The University’s Faculty of Business, Law and Social Sciences, as well as its School of English will be based in the building, which sits opposite the city’s Curzon Street Station arch - the world’s oldest railway terminus which is set to house the future high speed rail station.

The opening forms part of the University’s £260 million expansion programme which has already seen the opening of the £62 million Parkside Building.

Work has already started on a new £46 million home for Birmingham Conservatoire and planning permission has been requested for a new School of Life Sciences and School of Education facility in the city’s southern suburb of Edgbaston.