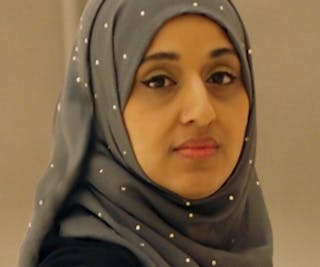 Koser Shaheen is a Knowledge Management Attorney for Cleary Gottlieb Steen & Hamilton LLP, a leading international law firm. She is also General Secretary of the Association of Muslim Lawyers and a member of Cleary Gottlieb’s London Diversity Committee.

Before working at Cleary Gottlieb, Koser did her Legal Practice Course as part of a training contract with Freshfields Bruckhaus Deringer. She graduated from the LLB (Hons) Law course at the University of Central England (now Birmingham City University) in 2007, with the highest-graded first in her year.

Koser decided she wanted to be a lawyer while working at a tax office, as she knew she wanted more from life than a safe but predictable civil service job. Despite a lack of formal qualifications, she was offered a place on the course and was given the support she needed to return to academic study.

The course inspired her to aim high, and she was offered five mini-pupillages from well-known chambers in London. Seeking to work in more of a team environment, she sent an ad hoc application to Freshfields – which advises national and multinational corporations, financial institutions and governments – and was offered a two-week work placement. This meant she was automatically put forward for a training contract interview and, after passing all three gruelling training contract interview stages, she has not looked back since!

"I had left school aged 11 years old and when I started university I suddenly realised I hadn’t even written an essay! I had no comprehension of how to structure an essay, how to construct the introduction, the conclusion or where to begin. I am and will always be eternally grateful to the patient law tutors who helped me build the foundation skills which are still helping me in my city lawyer job today."

"Being taught by lecturers who had practical on-the-job knowledge also had a positive effect on my key learning experiences. Having a real lawyer in front of you, helped visualise the practical effects of the law and its application: our lecturers brought law to life."