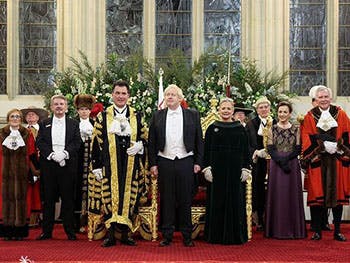 A jewellery student decked out the Lady Mayoress of London for the Lord Mayor’s Banquet in London in November.

Find out more about the School of Jewellery

BA Design for Industry student Pierce Haley created a tiara set with 120 gems and worn by the Lady Mayoress Amanda Keaveny as she accompanied her husband, Lord Mayor of London Vincent Keaveny, to the banquet at the Guildhall. Prime Minister Boris Johnson was also in attendance.

Pierce said: “My parents know the Lord Mayor of London personally, which helped me land the commission. The Lady Mayoress looks for small businesses to buy from, and thought it would be a great idea to come to me as I know her well. She approached me in the summer, and I went straight to work on the design.

“I came up with a lot of concepts, however, I’ve never made or designed a tiara before, so it was a steep learning curve. There’s a lot more that goes into a tiara than the size and curve of it, you have to think about how it’s going to sit on her head – is it going to sit forward or further back? I was working at Rivoli Jewellers in Jersey, and they helped me though the process as they’ve designed tiaras in the past.

“Once I’d created a design I was happy with, I sent it to Amanda, and she was very happy with it. She wanted a piece which sits low to the head and is simple, but in my style.”

“I knew he was good at Computer-Aided Design (CAD) and could help me out as I’m not very experienced with it. We had meetings to talk about how the stones should be set to the curvature of the piece and how it would sit on her head. Once we finished the CAD, which took two weeks, we got it 3D printed into three separate parts, as due to its size, the whole thing couldn’t be casted at once.

“I then moved onto polishing (mounting) the piece, which took a lot of time. I handmade the pieces where it would sit through her hair, so all together there were five pieces. Once everything was polished, I soldered it together, which was nerve wracking as this could potentially damage the piece. Fortunately, it all soldered together nicely. I then had to remove all the fire staining and the solder marks, and once I was happy I could start stone setting.

“Before this, I went down to London to get the tiara fitted – an important step to ensure it was as comfortable as possible. 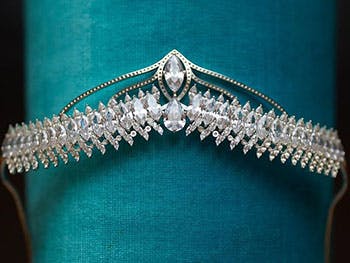 “The stone-setting stage took the longest as there were around 120 stones. I had to start setting the smaller bottom row stones and top row stones first, as the middle row sat higher. Then I had to set the two middle stones which were easy to set as they were so large.

“I went over all the settings again, checking them to see if all the stones had been set well – looking for a wobble and whether the stones were straight. I then did a final polish to brighten it up.

“Seeing Amanda wear the final version made me proud, as it took a lot of time to make the piece! Also seeing it being worn with everyone taking photos just motivated me to carry on making and designing.”