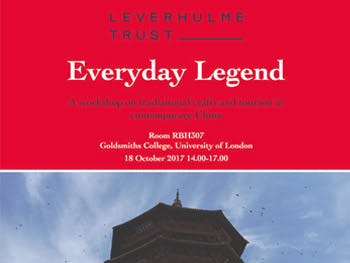 Hosted at one of the partner institutions, Goldsmiths College, University of London, Everyday Legend network project extends the debate from the fields of arts and crafts to the discussion of philosophy, tourism and anthropology. A workshop that shared the same title as the project took place on October 18, 2017. Professor Michael Hitchcock chaired the workshop at his home institute. The productive event started with a ‘traditional Goldsmiths Welcome’ to their Chinese guests, with skilled traditional music and dance performances by the Confucius Institute at the college. Welcome speech was also delivered by Professor Gerald Lidstone (Director of ICCE, Goldsmiths), Professor Michael Dutton (Director of Asia Centre, Goldsmiths) and Annie Guo (Director of Confucius Institute).

Professor Jiang Jiehong first introduced the project and its award from Leverhulme Trust to the audience. Project partner Professor Oliver Moore from the University of Groningen, who previously hosted the project’s European workshop, delivered a talk under the title“An Introduction to The Philosophical and Cultural Context of Craft Production in China”. The talk was based on the evidence that he gathered through our previous field trips to China, where he linked the examples to a broader intellect resonate informed by Chinese philosopher Mo Zi.

It was our honour to invite Ouyang Ningming, a clay sculpture artist that we met in Shanxi during the field trip in 2017. Ouyang Ningming has been practicing clay sculpture for making ancient figures for many years. Recently, his company has been awarded a grant by the China National Arts Fund, to develop a large scale traditional craft workshop to support its local boost in tourism. The location of this workshop is an old abandoned knitting factory which was once the heart of the country’s industrial revolution. He therefore shared the progress of this ongoing development to the audience and network partners.

Professor Michael Hitchcock gave a talk on his specialism, which is craft and tourism with a title“Authenticity, Creativity and Viability: Chinese Traditional Crafts in the Context of Tourism”. To some extent, his speech articulated similar projects that also raised by Ouyang Ningming.

Finally, Professor Jiang Jiehong joined the debate by giving a talk relates to his own specialism, contemporary art curatorial, but including his thoughts on the current stage of curating traditional Chinese arts and crafts in a Western context too.