Industrial sculptor to be honoured at University awards ceremony 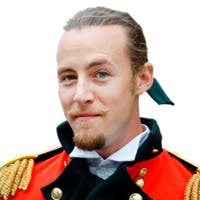 A sculptor who takes his inspiration from the West Midlands’ industrial heritage isamong the outstanding former students who will be honoured at Birmingham City University’s forthcoming graduation ceremonies.

Luke Perry graduated with a BA (Hons) degree in Fine Art in 2005 and is being honoured as one of the University’s Alumni of the Year in the Excellence in Sport or the Arts category.

With a passion for art and engineering, Luke uses his expertise in both fields to design and build large-scale sculptures that celebrate the Midlands’ industrial heritage. He is founder and director of Industrial Heritage Stronghold, a not-for-profit organisation which aims to “build Public Artworks which celebrate our industrial heritage in a very real way”.

His family runs a chain and rigging manufacturing company which has been in operation for over 100 years, and is one of the last remaining factories that still makes bespoke chains of the size that would have been used on the Titanic. Combining his family history with his own creative expertise, it was a natural choice for Luke to specialise in large-scale public art which reflects Britain’s industrial heritage.

As his reputation has grown, Luke is now often called on to create public art as part of new developments, but he also spends time himself looking at potential schemes where he can get involved. Community involvement is a priority for Luke, and he always begins projects by asking local people what they will like to see – which he believes has helped his installations to become accepted and valued by those who live nearby.

The past year has been his busiest yet, with projects during 2011 including designing, building and installing 37 sculptural installations for the Dudley No2 Canal, being commissioned to design and install the Chainmakers Monument in Cradley Heath and design the landscaping for the surrounding park, and being appointed by Wates Developments as consultant for the Dudley Guest New Village development.

He said: “I’m just so lucky to be able to do what I love as a career, which isn’t something everyone gets the chance to do. I’m always learning and there are people I work with who know far more than me, so I really feel very humbled that people have seen fit to recognise my work in this way.”