A Royal Birmingham Conservatoire alumna has become the first School of Acting graduate to be awarded a Doctorate. 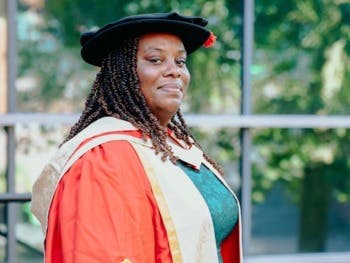 Dr Samia La Virgne, who was awarded at Birmingham City University’s graduation ceremonies in August 2022, is the first graduate with a PhD Performing Arts with an emphasis on Acting. All prior PhDs awarded by the Conservatoire have been music based.

The alumna successfully presented her practice research thesis titled ‘Lust and Disgust: Reimagining Injurious Representations and Experiences of Black Actresses in the U.K. and the U.S.’

The Director of Study and main supervisor was Professor Aleksandar Dundjerovic, Associate Director of Research in Performing Arts and the Director of CIPA at RBC. The co-supervisors were Professor of Black Studies Kehinde Andrews and Lecturer in English Dr Paola Botham.

After being awarded her PhD in November 2021, Samia was able to celebrate her success at her graduation ceremony in August. She said: “Pursuing a PhD was one of the hardest things I have ever done, and simultaneously one of the best decisions of my life.

“I am grateful that a practice-based interdisciplinary performing arts PhD programme now exists, because it gives actors and other theatre practitioners the chance to develop invaluable contributions to academia in unprecedented ways.

“Through my PhD studies, I not only established new knowledge in the world of academia, but I also grew exponentially as a person. I'm excited to see where this next chapter of my life will take me, excited to inspire others and shift the margins for the marginalised.”

Since finishing her PhD, Samia has become a permanent staff member in the Department of Drama, Theatre and Dance at Royal Holloway, University of London. She is Lecturer in Acting and Performance Making and will lead in shaping Royal Holloway's brand-new BA Drama with Acting degree programme.

Samia used her experience as an actor and director to interrogate negative stereotypes of blackness and womanhood, which produced significant academic achievements.

She aims to challenge the framework of actor training by seeking innovative ways to create more diversity and inclusion for marginalised groups in the performing arts industry.

The graduate has also recently been interviewed by the Huffington Post and most recently appeared as a guest on BBC Radio 4's Women's Hour, speaking about plus-size actors in the industry.