Radio graduate returns to the airwaves

A BCU Alumnus who lost the ability to project his voice for four years has finally returned to the radio airwaves. 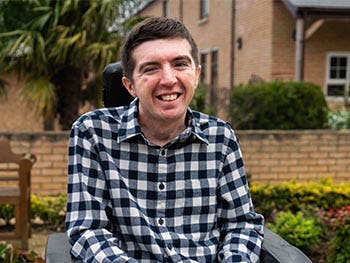 Joshua Donlon, who graduated from BCU in 2017 with a BA (Hons) in Media and Communication, specialising in Radio, was diagnosed with a brain stem glioma at the age of two, which affected his central nervous system and left him a permanent wheelchair user at the age of 12.

The graduate, who has worked at Huntingdon Community Radio station in Cambridgeshire since he was a teenager, had to step away from his much-loved presenting role to work behind the scenes as a producer due to respiratory complications caused by his tumour.

He said: “After being rushed to hospital one day, that was when the issues with my voice began. They found that I was aspirating, and food had gone down into my lungs, so they had to operate. I had a tracheotomy, which had a huge impact on my voice.

“In 2018, I got two bouts of pneumonia, just two months apart. I was in intensive care at my local hospital for a while. I was then transferred to another hospital for six months, before being discharged in April 2019. Whilst I was in hospital, I had speech therapy and the physios there did great work on me. I have had to learn how to speak again.”

After shielding during the pandemic, Josh started treatment at Askham Rehab facility in September 2021, where his treatment included several oral motor exercises to help improve his breathing and ability to swallow, as well as speech and language psychology and physio support. Josh said: “The whole therapy team have been so brilliant. It has made the world of difference to me and has meant that I’m able to project my voice again.”

Josh has since been interviewed on BBC Radio Cambridgeshire, sharing his courageous journey with presenter Chris Mann. The interview was Josh’s first time live on the radio in over four years, marking a milestone moment for the graduate.

Josh’s passion for radio started when he was just 15. He said: “I started volunteering for my local community radio station during work experience at school. I loved it, so I was keen to study it at college and university.

“Whilst I was at BCU, I worked on Scratch Radio. I worked on the station for my whole time at university, and in my final year, I became Daytime Programme Controller, which was a great experience. To be able to get a feel of what it’s like to work on a radio station, and the experience it provides, was so helpful.

“The station, combined with the course and support from my lecturers, has proved invaluable to my career so far. After BCU, I returned to the community station and have been there ever since.”

The alumnus hopes to return to presenting very soon. He said: “I love working on the sports show at the station, and I’m really excited to return as soon as I can. It means a lot to me. I love radio, it’s my biggest passion.

“I can still remember walking into the studio for the first time and sitting behind the microphone. I was instantly hooked. In recent years, due to not being able to present, I’ve moved into a producer role at the station. I had to adapt my radio skills to producing instead, but thankfully, it is something that I’ve really loved doing and I enjoy it.”

Josh is now looking forward to the future, with big goals ahead. He said: “In the future, I’d love to eventually work for the BBC.

"The last few years has really motivated me to eventually progress in my radio career. I can’t imagine doing anything else now.”