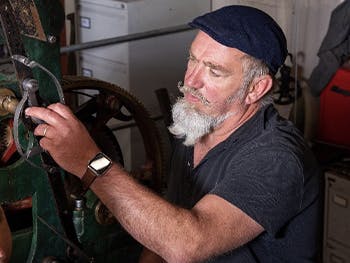 It’s been over four years since Big Ben was silenced to allow essential restoration work to be carried out on the Queen Elizabeth Tower in Westminster, but thanks to the work of a BCU alumnus, the clock will soon chime again in 2022.

Keith Scobie-Youngs graduated from BCU's School of Jewellery in 1984 and is now Managing Director of Cumbria Clock Company, the business he founded in 1990. The company, situated in the small village of Dacre in the Lake District National Park, employs 22 people and is constantly expanding thanks to their important work specialising in church and public clocks.

But most recently, his time and effort has been spent on the world’s most famous clock: “We have been working with the Palace Clock team for almost five years now. After working with the team before in 2007, I stayed in touch with them, so when the Elizabeth Tower project first came around, we were approached to go along and discuss what is involved in working on a building site with a large clock.

“We ended up getting more and more involved in the project and we were eventually asked to assist the team from start to finish. After we dismantled the clock, the whole mechanism came up to our workshop in Cumbria, and then we were able to start this huge conservation project.

“We weren’t able to make it public knowledge that the clock was in our workshop for a long time in case tourists came by, or even potential thieves. Thankfully, with the help of the locals, we kept it all under wraps for a long time. We were able to start taking the clock back down to London a few months ago, and now we just need to get it back up and ticking.

“By spring 2022, we should be finished and everyone will hear Big Ben’s chimes across London again. But it really was incredible to have the heartbeat of the nation ticking away in our workshop.”

Keith’s love of clocks started at a young age. Inspired by his father’s work as the head of woodwork, metalwork and technical drawing at the local school, he was taught that if you can work with your hands, you’ll have a job for life. He said: “I was just 17 when I moved to Birmingham from a small village. It was a massive culture shock, but also the best thing to ever happen to me as it made me aware of a world that I didn’t know existed. My time in Birmingham was an incredibly important time to me growing as a person.

“It was a very small course at the time, really wacky and there were only a couple of lecturers. But we were taught well, and that set us up for life. After graduating in 1984, I moved down to London and became a Clockmaker. When I met my wife, Lynn, she saw that I was a talented worker, so suggested that we set up our own business. We were just 26 years old, but we took a risk. We left London, headed for the Lake District and never looked back.” 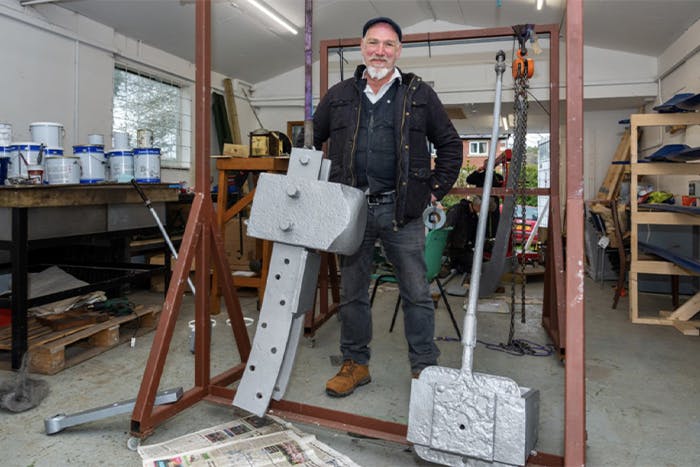 Other than Big Ben, Keith and his team work on a wide range of other public clocks across the UK, including the Royal Liver Building in Liverpool, which has the largest clock dials in the country, and Salisbury Cathedral, which houses the country’s oldest working clock. He said: “We also look after many royal palaces, including Hampton Court Palace, many London Underground historic clocks and we’re currently working on a major restoration of Manchester Town Hall’s clock.

“We also look after lots of smaller and really interesting clock towers, which house so many horological gems. Outside of the UK, we have worked in Fiji on their government buildings, and also in Hong Kong. We specialise in this fascinating, giant world of horology and I’m lucky to have a very skilled set of people working alongside me.”

Keith’s love of the industry has also had an impact on his family members, with his son, Callum, being a current BCU Horology student, and his nephew, Peter, being a fellow alumni of the course: “Clocks have always been a big part of our family life, so it was inevitable that Callum would end up studying Horology at BCU too.

“If your parents have set up a clock company and are always discussing it at the dining table and their whole lives essentially revolve around the business, it’s no wonder that Callum felt inspired to study it himself, and he’s taken to it very well. We’re very fortunate to have our family members follow in our footsteps.”

Keith is now working closely with BCU to offer opportunities to current students. He said: “We’re keen to put back into the system what we got out of it, as without the School of Jewellery, I wouldn’t be where I am now.

“The company are now working alongside BCU to offer work experience opportunities. We’re happy to pay for their travel, accommodation and expenses too. We just think it’s really important to give students an understanding of both the industry and business, and experience part of our world.

“Horology is such an important course. The trade is in danger, and to give people the opportunity to study it is crucial. It’s vital for places like BCU to keep these niche but necessary courses going.”

Find out more about Horology at BCU.