The University has purchased 20 Emergency Bleed Control Kits, which are available at reception points in all University buildings. 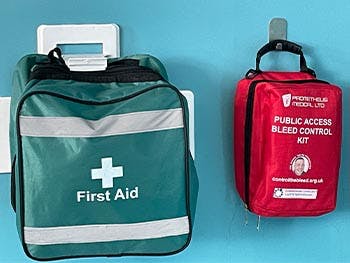 The Bleed Control Kits, also known as Emergency Trauma Packs, are similar to first aid kits, and include trauma dressings, chest seals and tourniquets to help stem serious bleeding. They have been shown to provide people who have been hurt with vital assistance and time while waiting for the Emergency Services to arrive, by reducing blood loss until medical help arrives.

The kits have been funded by the University, but will be accessible to the public in an emergency. Security staff and University first aiders will be trained on their use.

BCU Mental Health Lead and NHS nurse seconded from Birmingham and Solihull Mental Health Foundation Trust (BSMHFT) Penny Kimbrey said: “We’re really pleased to be rolling out bleed kits to reception points in our buildings. We’ve worked closely with BSMHFT, as well as the Daniel Baird Foundation, to make this happen. While we hope that they will never be needed, they are an important and useful tool in assisting anyone hurt on or near our campuses.”

Health and Safety Advisor Carl Bust added: “As a city centre university, and the University for Birmingham, these will provide a community resource that will be available to our wider community, should they need it. Much like defibrillators, these kits buy vital time while waiting for the emergency services.”

The bleed kits have been promoted by the Daniel Baird Foundation, set up by Daniel’s mother Lynne after her son was fatally stabbed following a night out with friends in 2017. Based in Birmingham, the foundation has already distributed thousands of the kits across the country, and aims to raise awareness of bleed kits, and works with local government organisations, community groups and business organisations to get them into as many venues as possible. They also support with training on the use of the kits and campaign for bleeding control to be incorporated as a mandatory element of first aid training.

Lynne Baird said: “I’m delighted to hear that Birmingham City University will be deploying Emergency Bleed Control kits across the University. Ever since Daniel was fatally stabbed, I have worked tirelessly to make bleed control kits publicly available to everyone by putting them in pubs and clubs across the country. Last year, in partnership with Turtle Engineering and West Midlands Police and Ambulance Service, we have started deploying the lifesaving medical kits in dedicated bleed control cabinets making sure they are available in an emergency to everyone.

“The kits have already been used to save two lives in Birmingham in September this year. We hope to see other educational institutes follow the excellent example set by Birmingham City University and protect their students and staff with these medical kits in their areas.”

The call for more kits has been in the news recently, after they were used to treat two men stabbed in a nightclub in Birmingham. The men were treated with bleed kits at the scene, and later taken to hospital before being discharged.

As well as helping victims of violent crime, the kits can also be used in the event of road traffic accidents or workplace accidents.

Birmingham Yardley MP Jess Phillips also put her support behind the kit campaign recently, saying: “Having worked with Lynne, and now seeing the benefit of these kits, we will try and find the right piece of legislation to put in; at the very least a review of the need for bleed control kits.

“Obviously we’ve all got to focus on ending knife crime, but the two things are not mutually exclusive. We’ve got to respond to the world we live in. If my kid was stabbed, I’d much rather there was a bleed control kit nearby.”