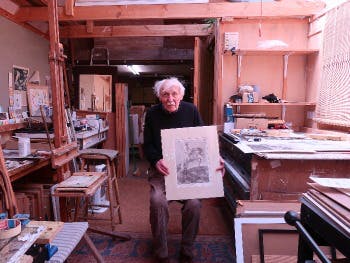 After a career spanning over six decades, Birmingham City University alumnus John Skinner is set for his final ever exhibition. Our Alumni Communications Officer Bethan Challoner travelled to Staffordshire to meet the artist ahead of this milestone celebrating a lifetime of art, creativity, and industry success.

John Skinner’s art studio sits at the bottom of his garden, right next to the River Trent in the picturesque village of Stone in Staffordshire.

It is an incredibly peaceful setting, with just the ticking of a grandfather clock and the distant sound of the stream to be heard. Packed top to bottom with almost 60 years’ worth of work, tools, and paintbrushes, his studio is a treasure trove of memories and art which he has gathered in this creative space over the 58 years he has lived in the house.

We sit down, get ourselves comfortable, and start unpacking 90 years of a very full and well lived life. 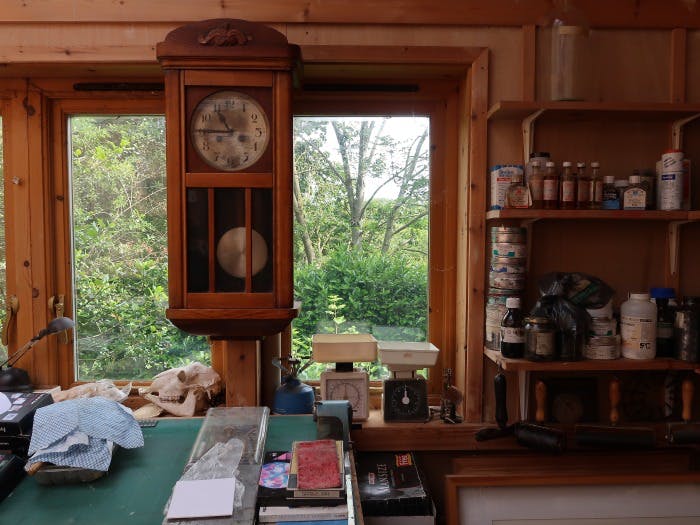 Born in Rushall, near Walsall, on January 3, 1932, he and his family then moved to Harborne in Birmingham, and they stayed there throughout World War II.

John, also known as Jack, attended a local primary and junior school, before attending King Edward School Five Ways in 1943, and then joining King Edward School Birmingham until 1948, which is where he found his love of drawing and started to admire the work of French painters Pierre Bonnard and Edgar Degas.

Growing up just a stone’s throw away from The Barber Institute of Fine Art and, thanks to regular visits to Birmingham Museum and Art Gallery, John’s passion for art well and truly began, and he decided to enrol at the Birmingham College of Art, now Birmingham City University’s School of Art.

He reflected on his time at the School: “During my first year of studying, we were based in an old elementary school, just outside of the city centre. I would get the bus there every day, and there was a local café where I would enjoy cups of tea before and after classes with my peers.

“In my second year, we moved up to intermediate level, so my classes took place in the School of Art on Margaret Street. At the time, there were many ex-service people studying there, who had obviously seen all sorts in the war, so they were not there to mess around. They wanted to do well, and they set a real standard for all of us. Back then, there was no nonsense and we had to work hard to keep up with them.

“At the end of my second year, I then had to choose which area of art I specifically wanted to focus on. I chose Painting, which was by far the top choice at the time. Bernard Fleetwood-Walker, who was also from Birmingham and graduated from the School of Art himself, was the top tutor and I learned a huge amount from him. I completed two years in the painting school, before doing an ATD (Art Teachers Diploma) in my final year.” 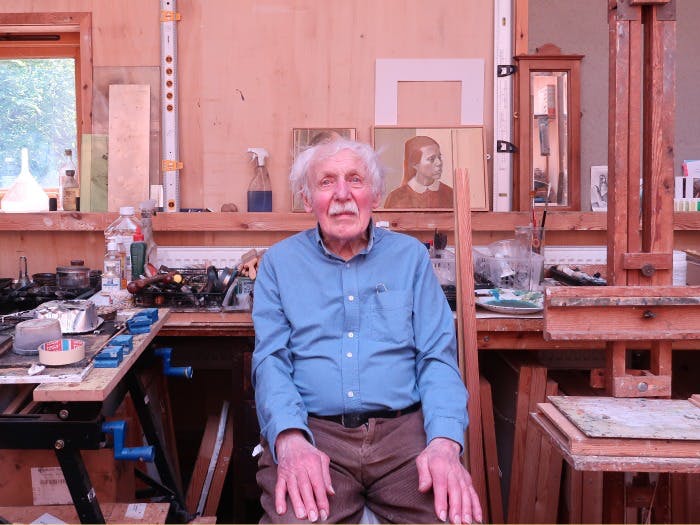 After completing his course at the School of Art in 1953, John was called to do National Service. He was based at Catterick, near Richmond, until 1955. He even won the Regimental Championship for Shooting. He then got married, moved into a flat in Kings Heath and decided to return to the School of Art, alongside raising his two children.

He said: “I had been interested in ceramics for a while at that point, so decided to return to Margaret Street to complete a part-time degree in Ceramics. I was soon asked to start teaching at a few evening classes, which I did even after my I completed my degree in 1957, and three years later in 1960, I was offered the opportunity to become a full-time Ceramics tutor at the School of Art.

“We had many experts who would come in and do classes with the students, and having that level of expertise around us, had a profound impact on both the staff and students work.

“But so much was changing all around us. In fact, everything changed in the 60s. The end of compulsory National Service changed so much for young people, and they could focus much more on their passions, whether that be art or music.

“For example, bands like The Beatles probably wouldn’t have existed if they’d have had to complete National Service. They would have had the music kicked out of them! Life for the students I was teaching was a lot different than it had been for me just 10 years beforehand.

“There were also suddenly loads of new developments across Birmingham, and it became much easier to get in and out of the city, so we soon moved to our home in Stone, where we have been since.” 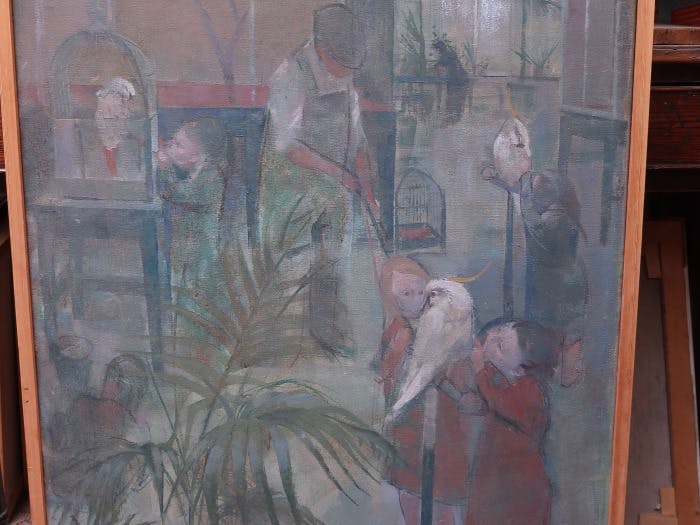 John showed us this painting of Birmingham Botanical Gardens, which he completed in 1952 during his time studying at the School of Art.

Just a few years into his teaching career, John found himself getting offers from other institutions, thanks to his specialist subject.

He said: “At the time, the pottery industry was booming, especially in Stoke-on-Trent and around these ends of Staffordshire. I was invited to attend an interview at Stoke Art College, which is now part of Staffordshire University, to teach Ceramics. Then, in 1981, I was appointed Head of Department of Fine Art, and I remained there until 1991.”

However, the alumnus continued to lecture in painting and life drawing at Wedgwood Memorial Adult Education College and the Frink School of Sculpture in Tunstall until 2006.

Alongside a successful career in higher education, which included a sabbatical in 1988 where he was given the opportunity to visit the USA and explore fine and public art, John also worked tirelessly on his own work, including exhibiting porcelain and stoneware pieces across the UK and Europe. He even designed and produced a cut tile mural for one of five marriage rooms at Birmingham Registry Office.

Since retiring from teaching in 2006, John tells us that he has continued to exhibit his work in both ceramics and painting, at many major exhibitions across the UK. He now has a huge collection of work including figure paintings, portraits, life painting and landscape pieces, alongside etchings and drawings.

But after 74 years in the art world, John has one major career highlight.

He said: “I used to be invited regularly to take part in various summer exhibitions, where there would also be a series of lectures and talks over the duration of a week. In 2012, I was exhibiting at an event in the Peak District. One of the keynote speakers was the Duke of Devonshire, Peregrine Andrew Cavendish. His family are the owner-occupiers of Chatsworth House, and he is a major art collector.

“About 10 days later, I had a call from a friend of his who said he wanted to buy some of my paintings. So, I met with him and his wife, and they purchased six paintings from me. As someone who is very knowledgeable about art, that was a real highlight for me, and it was a particularly special moment.”

But what advice does he have for our current students at the School of Art? He said: “The most important thing is your drawing; it all starts from there. It sounds very simple, but you must focus on the quality of your drawing.

“If you draw well, there’s a good chance you’ll be good at painting and many other aspects of art too.” 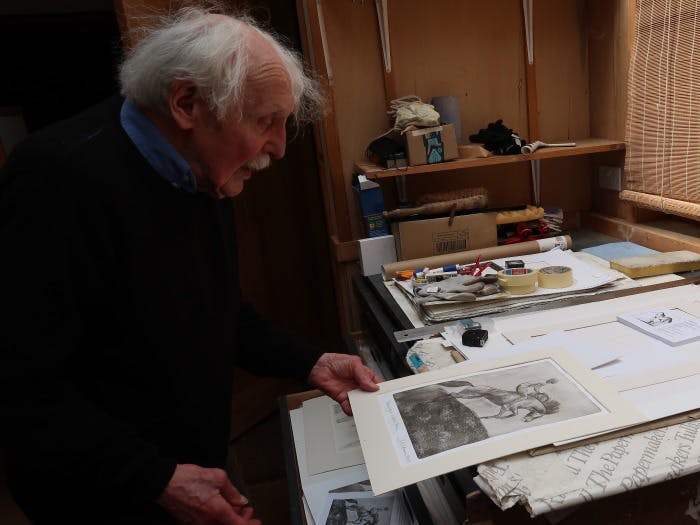 After showcasing his work at over 50 events in the last 20 years alone, John is now preparing for his last exhibition, which will show a wide range of his work from across his career.

The exhibition, which will take place at Foxlowe Arts Centre in Leek, Staffordshire, from 17 September until 29 October, will feature work from his time at the School of Art, right up until present day.

We ask him how it feels to be putting on his last ever exhibition. He smiles and says: “I just feel very lucky to be 90. You can’t foresee how things are going to work out for you, what your life is going to be like.

“I consider myself very fortunate to have been able to do what I love, and to still be doing that at 90 years old, is really quite remarkable.”