A Fine Art graduate who swapped teaching for the big screen is set to see his work shown in two of the biggest movies being released this year. 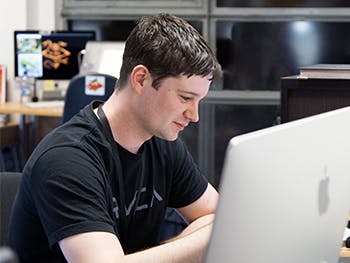 Matthew Hill completed a BA in Fine Art in 2010 before returning to complete a Masters in the same subject, and later coming back to BCU to receive a PGCE in Further Education.

His hard work will be shown on screens across the world in The Batman on Friday 4 March, where he worked as a Concept Modeller, as well as in Mission: Impossible 7, coming out later this year.

Matthew, who is currently working as a Concept Artist on Mission: Impossible 8 at Paramount Pictures, never thought he would end up working in such an exciting industry. After starting off teaching Fine Art and Photography at a local college, before becoming the Course Leader in Interactive Media, Matthew became a Digital Artist and Illustrator for Games Workshop, which then gave him the skills to teach Game Art at the University of Worcester, before becoming a Lecturer in Creative Digital Skills at Coventry University.

But after uploading snippets of his work online during his teaching career, Matthew was invited to work on a new film. He said: “I was approached to work on a new Mark Wahlberg film called ‘The Six Billion Dollar Man’, but after a few months, production was stopped and I assumed that was the end of my film career. But then I got asked to work on a Netflix series called ‘Cursed’, and then a series of commercials.

“I was still working at Coventry University when I got offered the opportunity to work on The Batman, and I couldn’t say no. After I’d finished that, along came the chance to work at Paramount Pictures as a Concept Artist for both Mission: Impossible 7 and 8. I never really expected to work in film, and I always thought that it would be a temporary thing. But then I got more and more offers, to the point that it became a very real full-time job for me.”

Matthew’s day-to-day role now consists of designing sets for major films and seeing his designs come to life. He said: “One of the best aspects of my role is designing the visual elements of the film. This is all done during pre-production.

“Once my designs have been approved, they are then passed on to other departments who go on to physically constructing them ready for filming.”

After gaining three qualifications from BCU, Matthew is grateful for what his time studying provided for him. He said: “Finding work in the film industry is a lot about your portfolio and previous work as opposed to your formal qualifications. But my time at BCU provided me with the time to learn a skill set that I have been able to use in both my teaching and film career.

“Just having that time to really focus on learning all kinds of different skills has benefitted me in my career, as I use many of them on a daily basis.”

However, finding work in film is very different to other sectors, and Matthew has had to put some serious work into building his portfolio. He said: “The film industry works in a totally different way to other industries. Many jobs aren’t advertised, and you mostly get hired based on recommendations and word of mouth. In a lot of cases, it can be very much just about being in the right place at the right time. When a project ends, it is my responsibility to find another project to work on. It’s all about relationships, as I have to contact art directors and others in the industry to find out about other work I could get involved in. It’s all about networking.

“I didn’t know anyone in the film industry just a few years ago, but after putting my work online and getting myself out there, I now have connections across the sector. But trying to find film work can be really difficult too. A lot of the industry is based primarily in London, and as I don’t live in London, it can be difficult to get a foot in the door as it can be a closed community.

“Having that knowledge about how to break in to the industry is vital. It really is all about knowing how to market and network yourself very well. Almost all of my work has come from Facebook or Linkedin, so it’s really important to build a social media presence to be able to get that kind of online exposure.”

But despite his film success, Matthew’s proudest moments are when he returns to his old stomping grounds: “Since graduating, I’m most proud of the moments I get to go into local schools and colleges, and even back to BCU, and share what working in the film industry is like, and how they can do it too.

“If it wasn't for me sharing some work online, I never would have worked in this profession. I feel like there's a lot of people out there that have got the talent, but they just don't ever get that big break or get the chance to show the right people. So I always try and make the time for those events, to be able to speak to young people and students. It is so rewarding a few years later when I receive an email saying that my advice really helped them.”