A number of talented members of Birmingham City University’s alumni community played key roles in the funeral of Queen Elizabeth II due to them being musicians in the Royal Air Force (RAF), British Army, and the Royal Marines. 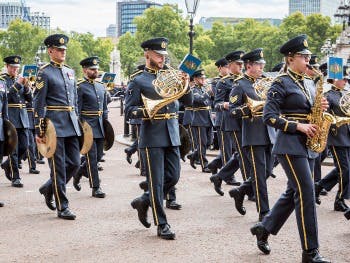 The funeral, watched by over 28 million people in the UK alone, saw 18 graduates from the University’s Royal Birmingham Conservatoire (RBC) taking part in the procession from Westminster Abbey to Windsor Castle.

Air Specialist Class 1 Alan Thomas, who graduated from RBC in 2000, is now a Trumpeter in the Band of the RAF Regiment.

Speaking of his role in the funeral, which took place on 19 September, he said: “Given the sad news of Her Majesty’s passing, Operation London Bridge went immediately into action. We were notified of our roles within 24 hours and started rehearsals on the Monday before the funeral. This included an overnight dress rehearsal, starting at 2.30am and returning to RAF Northolt eight hours later.

“It was a real honour to be part of such a historic moment and pay tribute to the figure head of the armed forces. Forming a huge, massed band by Wellington Arch was memorable. Surely the largest rendition of God Save the King! We also formed up on horse guards, where we listened to the funeral service over the speakers, hearing the splendid choral singing and trumpeting by the household cavalry.

“It was such a large operation, right from leaving RAF Northolt at 4.30am, being fed and looked after at Wellington Barracks and forming up amongst 3,000 troops taking part in the funeral. It was a real privilege to be a small part of such a momentous tribute to Her Majesty.” 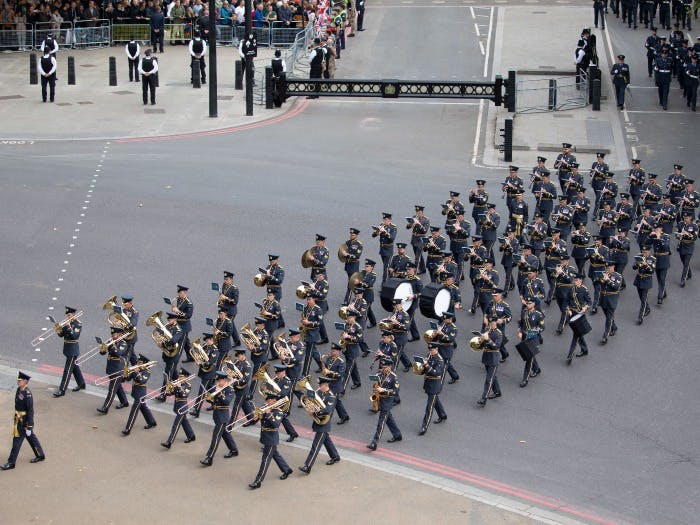 Neil Chapman graduated from RBC in 2000 with an MA in Performance. Nowadays, he is Media and Communications Officer at the Royal Air Force Music Services, alongside being a musician in the RAF, where he plays the bassoon, and doubles up on bass drum or cymbals for parade work.

Following the death of the Queen, the alumnus expected to look after any media enquiries directed towards the RAF bands, but was surprised to be asked to also play at the funeral.

Neil said: “I knew I would be looking after any media enquiries directed towards the RAF Bands, but it was a great honour to be asked to play with the one of the bands for the funeral.

“All RAF Musicians were brought to RAF Northolt for rehearsals a week before the funeral, it was at this point I was informed I would be playing the cymbals in the Combined Bands of the RAF, which would lead the RAF Contingent in the procession.

“We began with music rehearsals in the studio, which were followed by drill rehearsals on the parade square to become accustomed to marching at 75 paces per minute. This pace is unique to state funerals and is neither the 'quick' or 'slow' march tempo we usually march at.

“There were also several rehearsals at RAF Halton in Aylesbury with the RAF personnel that would be marching with us on the day, representing the RAF in the procession. This was essential for the troops to get used to marching to a band and good for us to build stamina and familiarity with the music.”

He added: “The procession, from our starting point on Horse Guards Parade to Wellington Arch, was 25 minutes of continuous marching and playing. This requires stamina, strength, and endurance. Rehearsing builds this as well as confidence in your ability to play at a high level whilst marching for that length of time.

“The bands were match fit, having only recently performed at several large-scale events in celebration of Her Majesty the Queen's Platinum Jubilee. However, nothing was left to chance for what would be the largest ceremonial event anyone in RAF Music Services had ever been involved in.” 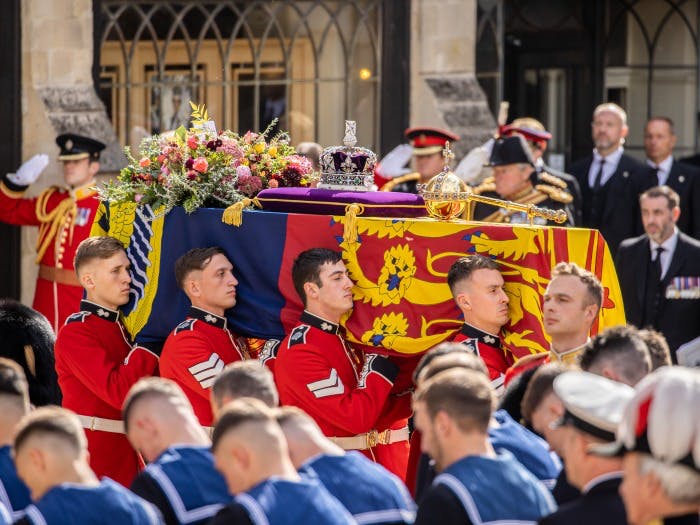 Neil gave us an insight into what his and his fellow graduates day looked like. He said: “We left RAF Northolt at 4.30am on the morning of the funeral to travel to Wellington Barracks on Birdcage Walk to join the 3,000 other military personnel who were involved in the funeral.

“There was time to eat breakfast and rest before we formed up on the parade square in our procession groups to march into our positions, the RAF being positioned on Horse Guards Parade. Whist we were marching away from Wellington Barracks in one direction, in the other direction, the Band of the RAF Regiment were marching a route lining party of RAF personnel to Constitution Hill where they would stand along the route, paying their respects to the procession as it marched past.

“In our position on Horse Guards Parade, we could hear the audio from the big screens, broadcasting the service from Westminster Abbey. We were brought to attention for the two minutes silence and national anthem. This was our cue to ready ourselves to begin the procession.

“Soon, we were given the command to follow four beats on the bass drum, as we began playing the six marches which made up the march sequence. The funeral marches included Mendelssohn, Chopin, Beethoven and Regrets by Charles Panne. We processed out of Horse Guards Parade onto The Mall, lined with Union Jacks and crowds like I have never seen before, a sea of faces and mobile phone cameras.

“After marching past Buckingham Palace, the railings of which were lined with a guard of honour made up of palace staff, we continued on to Constitution Hill, passed the floral tributes in Green Park to Wellington Arch. Here, we joined with bands from our sister services to make up a massed band. We awaited the arrival of the coffin and played the national anthem, a fitting farewell as the cortege left London for the last time.” 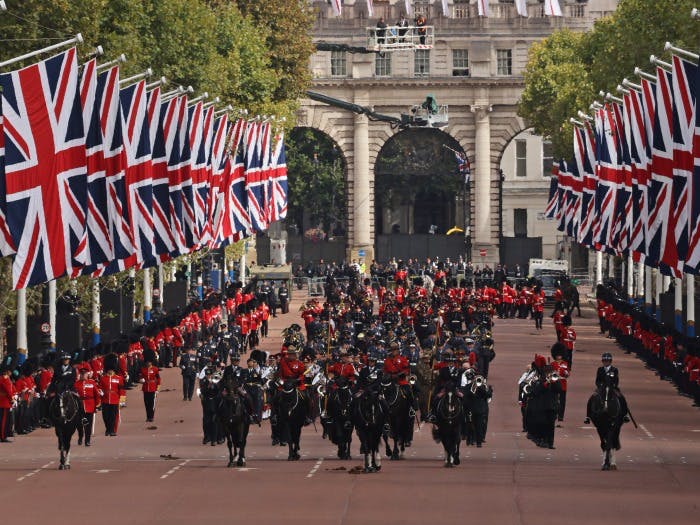 Reflecting on the day, Neil said that many moments will stay with him for the rest of his life. He said: “It was an honour to represent the RAF for Her Majesty the Queen, the Commander-in-Chief of the Armed Forces. I was immensely proud of the RAF Bands and bands from our sister services for their immaculate music making and turnout, a great reflection and demonstration of the role military bands play in the civic life of the UK.

“The early morning rehearsal on the Thursday morning was a dress rehearsal for the funeral procession. It was a very surreal experience. Marching around the procession route in full ceremonial dress at 4am, playing the marches as though it where the actual event, is something I will never forget.

“It really struck me how important music was to the occasion, the choristers, trumpeters and bagpipes in the service and the bands that provided the steady, continuous funeral music which accompanied the coffin during the procession. Not only did it keep everyone in step, but it seemed so fitting, setting the tone for the occasion.”

Amos Miller, Head of Brass at the Royal Birmingham Conservatoire, said: “We’re so proud of our brilliant Percussion, Woodwind and Brass alumni for playing a key role in such a momentous occasion, and one which was apparently watched by over half the world’s population.

“The whole event was a reminder of the critical importance of music and demonstrated the sheer professionalism of all the performers involved.”