Alumna gets taste of success on The Great British Bake Off 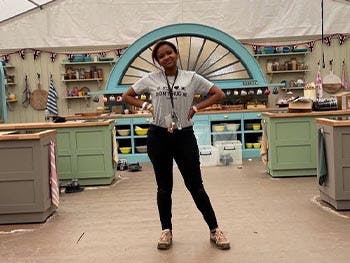 A Media Production alumna is celebrating seeing her hard work on screen in the latest series of The Great British Bake Off.

Elvinah Xhignesse graduated from BCU with a BA (Hons) in Media and Communication in 2019 before returning to complete an MA in Media Production, which she graduated from early this year. Since then, Elvinah has thrown herself into all things TV, scoring a series of roles on some of the UK’s biggest shows.

After completing two weeks on the set of Channel 4’s Bake Off: The Professionals shortly after graduating, Elvinah soon found herself working as a Runner and helping to set up the world’s most famous baking tent. She said: “My course friend got offered a job at Bake Off: The Professionals and she told me that they were still looking for people to help out on set. So I applied and they contacted me straight away and offered me the role.

“At the time, I was working in Poundland and after just two weeks working on the set of Bake Off: The Professionals, I decided to work on my CV and started applying for various TV roles. Then the opportunity to work on The Great British Bake Off popped up.

“Working on Bake Off was particularly fun as the team was really supportive. I was able to work on the main kitchen and help to create a lot of the set, including making sure that the contestants had everything they needed. It was amazing to see how everything works and comes together.

“Because of Covid measures, we all stayed together on location, which was so good. It has been great to see the first few episodes of the series so far, and say that I was a part of it. My main Bake Off highlight was when the kitchen was finally complete and all the bakers were there; I was really proud of the work that I’d done so far.” 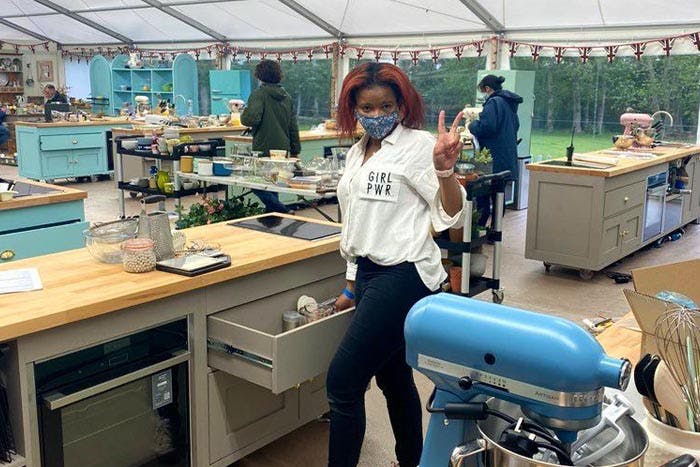 Since working on the Bake Off set, Elvinah hasn’t slowed down. She has since worked on BBC Two’s All That Glitters, which was filmed at BCU’s School of Jewellery earlier this year, as well as Channel 4’s The Last Leg and ITV’s In for a Penny.

More recently, she worked on Channel 4’s new dating show The Love Trap, which will be broadcast later this year. She said: “Working on The Love Trap was so much fun; it’s a new dating show and it was so different to what I’d worked on before. There were many challenges and it made me realise that it is the kind of entertainment show that I’d like to work on more in the future.”

Nowadays, you will find Elvinah on the set of the upcoming new series of Channel 4’s 24 Hours in A&E. After starting as a Production Assistant, she is now working as a Researcher on the series. She said: “Working as a Researcher is really interesting and gives me a lot more responsibility too. I also get to work closely with the producers, which is really cool. I love working in a high-pressure environment as there are a lot of challenges that I can work on and support the team with.”

Since landing many backstage TV roles, Elvinah, who moved from Belgium to Birmingham seven years ago, is happy that her MA allowed her to learn more about TV and production before jumping into the industry. She said: “When I lived in Belgium, I used to watch Doctor Who and knew that one day I would move to the UK and work on huge shows. I always just wanted a camera in my hand and have opportunities to be creative, so TV is very much for me.

“When I graduated from my BA, I wasn’t really sure where to go from there. So I decided to return to study the MA in Media Production, to find out more about the TV industry specifically. I’m really happy that I did an MA as I don’t think I was ready for the sector before, but my Master’s got me there.” 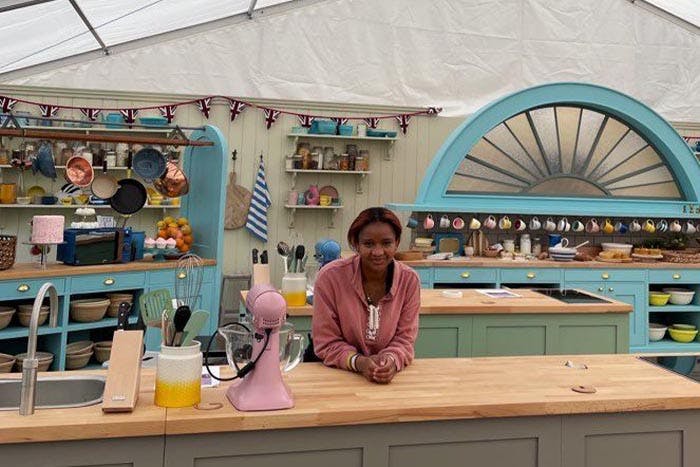 Elvinah has high hopes for the future, and is looking forward to more TV opportunities that will come her way. She said: “I’m most proud that I didn’t give up on TV and kept going with it. Others around me suggested to stay working in retail to have some money coming in, but if I’d have stayed there, I would never have gone for all the jobs that I’ve worked on since. I always had a fear that I wouldn’t succeed, but now I’m really happy that I’ve been able to have so many experiences and I can’t wait to continue to grow from here.

“My ultimate goal is to become a Story Producer as I have been able to see how producers work and how they create a story within these very real, unscripted shows. I am a storyteller, and I’d love to do that one day. But for now, I really enjoy being a runner, researcher and assistant and I know that there’s lots more I can do before I get to that stage.”

The Great British Bake Off is on Channel 4 every Tuesday at 8pm.