A talented BCU alumna is celebrating after her new exhibition, titled ‘Women of Paradise’, opened at the Ikon Gallery in Birmingham. 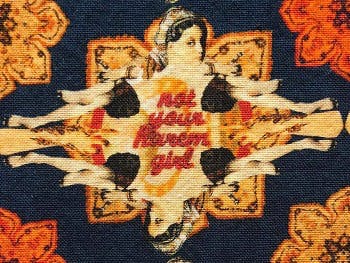 Farwa Moledina, who graduated with a BA (Hons) in Fine Art from Birmingham City University’s School of Art in 2018, is set to host the exhibition at the venue in Oozells Square until 13 November 2022.

‘Women of Paradise’ is a study of the four women promised paradise in Islamic tradition, including Maryam (a.s), mother of Isa (a.s), otherwise known as Mary, mother of Jesus.

Farwa Moledina’s work is often a study of female Muslim identity. She is interested in how the western historical art narrative portrays the Muslim woman, and whether this has impacted ways in which Muslim women are viewed in the contemporary world.

Presented in Ikon's Tower Room, ‘Women of Paradise’ is a response to the singular religious narratives that dominate museums and galleries. Built on principles of neutrality, these spaces rarely contain depictions of Mary outside of the Christian imagination. 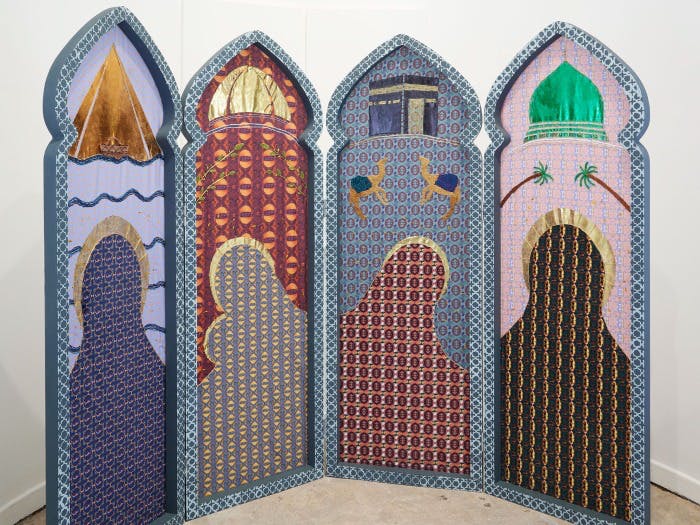 Farwa’s work interrogates this assumption of neutrality by providing a different perspective on this figure. In the work, Maryam, a subject of equal cultural significance in the East, is presented alongside three female figures largely unfamiliar to the Western world. These are Aasiyah (a.s), Khadijah (a.s) and Fatimah (a.s).

The work in the exhibition comprises four wooden frames which are hinged together, framing digitally printed textile and embroidery. The arched shape of the frames resembles a Mihrab, a niche found in the walls of mosques that indicates the direction of prayer. 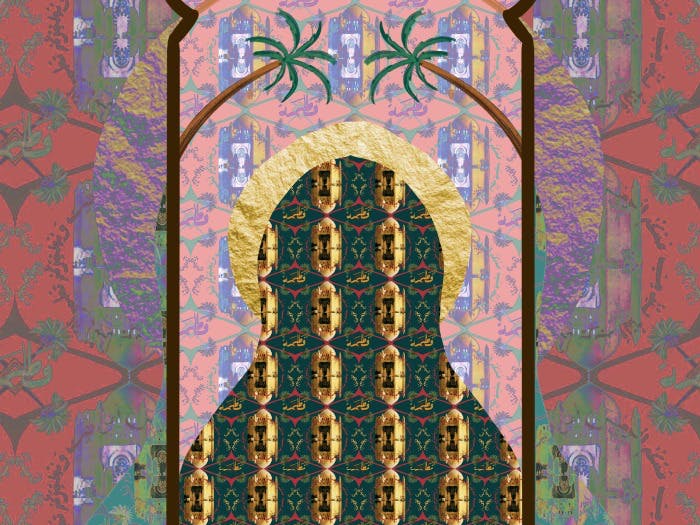 The textiles and embroidery are composed of patterns which relate to the identities of the women represented, with the pattern for Aasiyah (a.s) (the adoptive mother of Moses/Musa (a.s)) made from images of rivers, Moses baskets, pyramids and Quranic verses relevant to her story.

The patterns are inspired by principles of Islamic design, such as recurrence, symmetry, and abstraction. Islamic art encourages reflection of the self and the universe, and the exploration of what lies beneath the visual surface of this world. 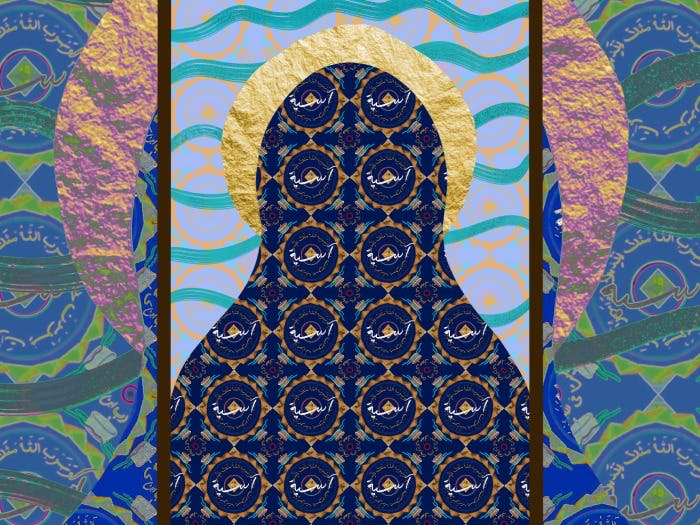 In the work’s textiles and embroidery, shapes are placed within other shapes until a pattern begins to emerge. These multi-layered compositions invite viewers to examine preconceived notions of Muslim women and Islamic tradition.

The exhibition is the latest success Farwa has experienced in her career so far, thanks to a series of previous exhibitions at Birmingham Museum and Art Gallery, Midlands Art Centre, and The New Art Gallery Walsall.

Head to Ikon Gallery to see the ‘Women of Paradise’ exhibition, which is taking place until Sunday 13 November 2022. Ikon is open Tuesday-Sunday, 11am-5pm. Find out more about the exhibition here.

Please note: (a.s) is an abbreviation of the arabic term Alayhis Salaam. It is used after the name of any religious figure to mean 'peace be upon him/her' as a sign of respect.