Iconic British supermodel Erin O'Connor had had a career in the fashion world spanning 20 years.

Erin has worked with many famous designers including the likes of Jean Paul Gaultier, Alexander McQueen and Ralph Lauren. She has appeared on numerous magazine front covers and been the face of advertising campaigns for Chanel, Armani, and Marks and Spencer.

She is also co-founder of the award winning 'All Walks Beyond the Catwalk' initiative, working with influential catwalk designers and top industry creatives to celebrate greater diversity within the fashion industry. 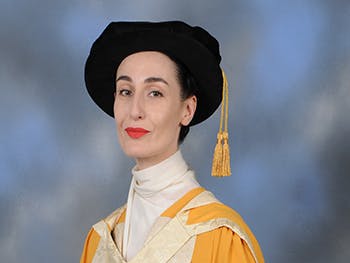 I feel so jubilant right now. It's such an honour to be here with Birmingham City University. One of my dreams was to graduate and fate intervened and I was taken away from education, I thought it would be momentarily, but 20 years later I'm still working. Growing up I had three main aims, to be independent, self-sufficient and educated. And I think the latter requires a lifelong commitment.
Erin O'Conner

I wanted to be a teacher like so many of the inspiring women in my family. Instead, my education was cut short and I have, over the years, become a self-educator. Like many people I have also learned about rejection.

In my early years, I was frequently told that I didn’t fit in, that I wasn’t quite right, and it wasn’t always put as politely as that. But no is a power you can use to your own advantage. You can make it into your own version of yes.

I wouldn’t presume to give you advice, other than to listen to yourself. You’re probably right. Don’t accept other people’s limitations or definitions. Work harder than you thought possible. Be kind to yourself and never ever forget to have fun along the way.