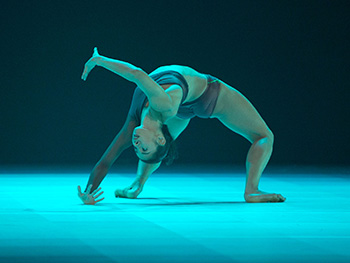 Professor of Moving Image and Photography Ravi Deepres, and a group of School of Visual Communication graduates had the exciting opportunity to work with choreographer Wayne McGregor.

Following a highly successful national and international tour of the original stage production, McGregor extended and translated his acclaimed work Atomos into a unique film experience, which was co-directed by long-time collaborator Ravi Deepres. The 70 minute film showed the incredible dancers of Company Wayne McGregor’s perform his choreography in his distinctive style, described as sculptural, rigorous, jarring and hauntingly beautiful.

The graduates were chosen by Ravi to be involved with the film as they had shown themselves to be reliable and creative and had good problem solving skills in a number of different areas. They were then assigned roles based on their strengths. Cherine’s role was to take the publicity stills for the film (see main image) and she commented how much she enjoyed the freedom of her role, as she was trusted to capture key moments. Working with the team enabled her to see the craft and sync of the entire group, from lighting technicians to dancers, and Cherine noted how it made her appreciate the amount of work that goes into such projects. Commenting on what she learned from the experience she added:

The most important thing I learned was that I can adapt and work with anyone and I can liaise with people I've never met before. These are important skills for life.

Atomos was made possible through supporters including The Space, Arts Council England and the BBC. As well as original footage by Ravi, the film featured a soaring score by A Winged Victory For The Sullen, lighting by Lucy Carter and costumes by wearable technology specialists Studio XO. Following it’s broadcast on BBC Four the film was made available to watch for a limited time on BBC iPlayer.

To find out more about what staff and students from the School of Visual Communication have been up to visit our blog.