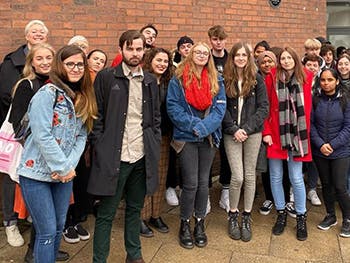 BA (Hons) Graphic Communication students recently travelled to Manchester to attend the annual Design Manchester Conference. The Conference celebrates design in all of its forms, and this year it focused on the word ‘SMART’ and everything that encapsulates.

The Conference was hosted by Patrick Burgoyne, the CEO of D&AD (Design & Art Direction), and included a number of diverse creatives and high profile industry speakers who led interactive workshops across the city. Students were able to hear from nine industry professionals in the main event room and take part in a number workshops. It gave them a chance to get hands-on with the design scene as well as the freedom to explore the city to see exhibitions related to the event.

Kicking off the first talk of the day was the highly profiled environmental group, ‘Extinction Rebellion’ who are recognised for using creativity to peacefully fight against ecological destruction. Rather than speaking about how the group uses design, they used their talk to highlight how the design community could help fight climate change. In their accompanying workshop, students were able to create woodblock/type posts and create wearable pieces of art by cutting out and sewing together the materials they were provided with.

Graphic Designer Hansje Van Halem, who gathered her recognition through distinctive typographic and geometric illustrations, appeared as a keynote speaker at the conference. Van Halem has developed a distinctive style which scopes between their disciplines of design, typography and illustration. She currently runs her own studio and works digitally in creating complex typographic experiments. BA (Hons) Graphic Communication student Amy Blackford commented on how much she enjoyed the talk:

It was nice to see how Hansje’s work developed over many years and into the practice she’s doing today. It was inspiring to see how my work could develop in 10 years’ time.

The trip proved to be a good networking opportunity for students to connect with current industry leaders, ask for advice on their portfolios, and create links for their professional careers. Third year BA (Hons) Graphic Communication student Jessica Jameson noted how great it was to be surrounded by world-famous designers and lecturers and have the chance to network with them:

I wanted to make industry links in the north as that’s where I’m from. I made the effort to speak to people and I’m now in contact with a designer who is helping me out with placement opportunities in London.

Notable speakers at the Conference included: Paula Scher, Neil Hubbard, Cosey Fanni Tutti, Daljit Singh and Harris Elliot. They gave students a useful insight into their careers, which varied from working with well-known arts organisations such as Tate Britain and the Arts Council to international style exhibitions and campaigns for brands such as Adidas.

The Conference was the final trip of the first academic term for BA (Hons) Graphic Design students and a good opportunity for students to realise the scope of the creative industries and get inspired for their own future careers. Reflecting on the day, BA (Hons) Graphic Communication lecturer Jane Anderson added:

The trip was a fantastic opportunity for students to hear from high profile speakers like Paula Scher from Pentagon, and it was great for community building as it was a cross-year trip.