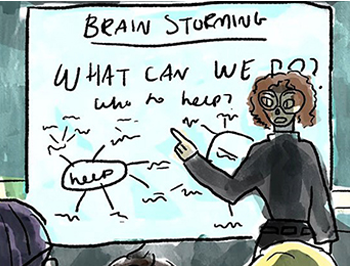 The RSA Student Design Awards is an annual competition for higher education students and recent graduates run by the RSA. The Awards challenge emerging designers to tackle a range of design briefs focused on pressing social, environmental and economic issues.

Arthur won the award for ‘How to be More Pirate’, his first complete animation that was produced as part of the Context of Illustration module of his degree. He used watercolour illustrations to showcase a miserable character journeying through the daily routine and then shifting to a different lifestyle.

The project involved creating 30 seconds of the final full minute piece, but Arthur was encouraged by his tutor to create a full one minute piece and submit it for the competition.

He had to pick one of three audios provided by the RSA, opting for the audio by social entrepreneur and public speaker Sam Conniff Allende. Arthur said: ‘How to be More Pirate’ is about how people from the younger generation are more compassionate than older generations; how people from my generation are trying to change the world for the better. This is a topic I feel passionate about, so I wanted to make an animation that shows the optimism and hope I feel for my generation.”

Commenting on his win, he added: It feels unreal honestly, I'm still amazed that the judges liked my work enough to give me an award for it.”

It's made me realise that I am capable of a lot more than I think. It's been such a good experience for me.

Arthur was a joint winner along with Julen Goni from the Edinburgh College of Art, beating shortlisted students from dedicated animation courses to win £500.

This is not the first time a student from the course has achieved success at the RSA Student Design Awards. In 2017, Illustration graduate Yasmin Cowen won the Natracare Award and £1000 for ‘Collaborative Animation’. She has since gone on work as a Motion Graphic artist in Digbeth after specialising in animation for the remainder of the Illustration course.