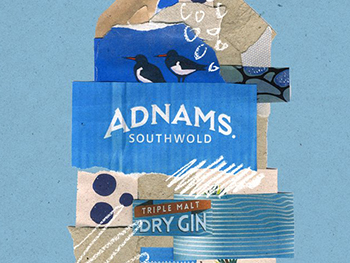 Every year, D&AD’s Annual brings together the best of best in creative work judged by the top creatives from around the world. This year our third year BA (Hons) Graphic Communication student Dylan Roberts had the honour of winning a D&AD New Blood Award for a campaign he created in response to a collaborative brief from an independent brewery Adnams and advertising agency Weiden+Kennedy.

As part of the brief Dylan was challenged to create a campaign that tells an exciting story about Adnams sustainable habits and makes a strong connection with a new generation of beer drinkers. Adnams is an independent, family run brewery that constantly innovates to create products that give back to the Earth it borrows from. After spending many hours researching the brand itself and new ways that other brands are presenting sustainability, Dylan decided to tell the message of the campaign through the brewery’s old advertisements.

Using ‘what’s already there’ and turning used ads into a visual, sustainable campaign was the main concept of Dylan’s idea. He went through and recycled hundreds of old Adnams ads and created a collage of their product range.

"I researched new sustainable technologies and came across a new type of paper which helps the declining bee population as the paper sort of acts as an energy drink for bees. Adnams is already doing lots to help out their local bees. I paired this idea of using their old adverts and printing this on the bee saving paper. Making the first advertisements that nature would want people to look at."

As part of the application process, Dylan created a video explaining his approach to the campaign and exploring the opportunities for the campaign’s touch points and brand activation. He wanted every interaction with the brand to show people how much they could save when they’re buying their next drink as well as making them feel that they’re doing something good for the earth.

I’ve always wanted to take part in the D&AD competition and having the opportunity to apply for the New Blood category was something I couldn’t miss. Winning a New Blood award has been a dream of mine for years and having my work recognised by the top creatives meant so much to me.

Dylan’s favourite part of the project was the research process and looking into new and different ways that companies focus on social and environmental investments as part of their marketing campaigns.

"I hadn’t heard of Adnams before but delving into all their sustainable habits made me warm to them. If I created an advertising campaign that would make me want to buy an Adnams product, then I did the job right!"

Dylan among other winners will have an opportunity to win a D&AD Pencil during the New Blood Awards Ceremony on 11 July. A Pencil is a prestigious prize which represents the very best of best in design advertising industry. Winning a Pencil remains the pinnacle of many careers and said to be the equivalent of a ‘career knighthood’ by some industry observers.

To find out what else our students have been working on take a look at our School of Visual Communication blog.