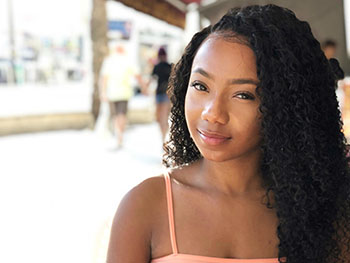 Marissa Lewis- Peart recently had the honour of winning this year’s Ben Martin Apprentice Award (BMAA), after being unanimously chosen by judges for her energy, passion, creativity and entrepreneurial spirit.

Marissa learnt about the BMAA through Epoch Design, an FMCG (Fast Moving Consumer Goods) branding and packaging Consultancy, where she had a two week placement in April. She stayed in touch with the agency and the Studio Directors encouraged her to apply for the Award. Their support encouraged her to do so and Marissa felt it was an amazing opportunity for her to get her foot in the door in the South West design scene, noting it came at the perfect time as she prepares to graduate in 2019.

As part of the application process Marissa had to create a short video about herself and her design strengths and submit a 500 word written application stating why she believed she should be awarded the opportunity. She was then shortlisted for a face to face interview and chosen as the winner shortly afterwards. Commenting on her win, she added:

It felt amazing to win, I couldn’t believe that I had been chosen. I kept thinking me...ME? It’s also taken a little weight off of my shoulders as I know that I’ll be leaving university with some extra experience, connections and industry support behind me as I begin my career.

The BMAA was created through a collaboration between IPA, Bristol Media and Babbasa who wanted to give the award to one young person from a disadvantaged background in the South West. It was presented in memory of Ben Martin who was the Managing Director of Bray Leino, a leading UK integrated communications group.

As part of the award Marissa will be taken to South by Southwest; one of the world’s largest film, music and interactive media festivals, held in the US in March, with a team of agency professionals to experience the festival, network and possibly create some content. When asked about what she was looking forward to most about South by Southwest, Marissa added:

I’m looking forward to attending some talks to expand my mindset, which may help me to think outside of the box more when it comes to my creative work, as well as experiencing some of the latest interactive media technology like virtual reality.

Upon her return she’ll also have paid placements at various creative agencies in the South West, as well as mentoring to support her as she begins her career, which she hopes will lead to becoming a freelance creative specialising in branding.

Take the first step in your graphics career with our BA (Hons) Graphic Communication degree and be sure to check out our Instagram page for the latest happenings from the course.