What’s your favourite sandwich? One from a ‘Taste the Difference’ range? One of the many seasonal specials? Even ‘Just Ham’ has earned itself a cult following!

Our student Joey Moxley decided to escape the big chains and jump into Birmingham’s independent scene to hopefully discover, and most importantly taste, some of the best sandwiches in the UK's second city.

"I've always been fond of a good sandwich, be it for breakfast, lunch or tea. I'm even doing a sandwich year as part of my degree at the moment so I couldn't wait to get stuck into the challenge." 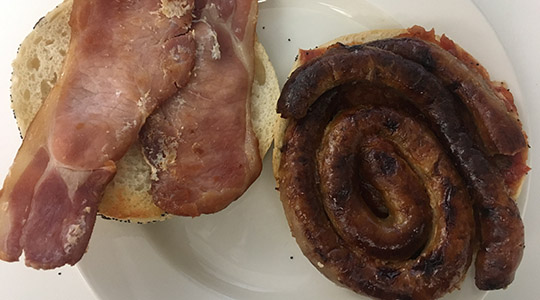 What: Sausage and Bacon Sourdough

To call this one a bap, is like saying a Ferrari is just a way of getting from A to B… Urban in the Jewellery Quarter is a gem. It offers breakfast, lunch, dinner and Sunday roasts, but it’s their breakfast sandwich option that has pulled me in. 'Cumberland sausage and bacon on a freshly baked sourdough complete with tomato relish' - that description alone got my sandwich juices flowing.

I ordered it to take out and it arrived promptly, hand delivered to me by a chef no less. When I finally got to open it I was not let down. It was a neat round sourdough bun, clearly freshly baked and topped with seeds. On removing it from the takeout box, I discovered two large pieces of bacon laying on top of an almighty Cumberland, one that wouldn’t look out of place next to a big serving of mash in a country pub. The relish was homemade and generously spread. Upon the first bite I found it to be an even bigger sensation on the taste buds than it was on the eyes. The bacon was well cooked. the Cumberland’s taste was even bigger than its size, and it was all held together brilliantly by the well-baked spongey sourdough. But the biggest revelation? The tomato relish, full of flavour, tremendously tangy and it married all the elements supremely well. It was my first sandwich on this journey to find Brum’s best, and I wasn’t sure it was going to get any better. Why every worker in the city isn’t queueing up for this breakfast delight is beyond me.

One for the veggies

200 Degrees is a coffee shop, that’s what it specialises in, that’s what it’s known for. However as soon as you walk in you can’t help but notice the selection of fresh baguettes all neatly sat on top of each other and displayed in nice wooden boxes, tied up with string and a napkin. But had as much care gone into the taste as had gone into the display?

I went for the veggie option: the ‘Jerk Veggie Cubano, Emmental cheese, Dijon mustard and sliced gherkin’. After pretending to know what a ‘Cubano’ was to people asking what was on my sandwich, a quick Google search told me that it’s a variation on a ham and cheese sandwich that originated in the cafés of Florida which catered to Cuban workers. I guess this variation was the lack of ham. I have to say that it was the bread that pulled me into this one. A long brown seeded baguette that looked fresh and incredibly inviting. On first bite that certainly proved to be the case, soft but crispy and the seeded topping added another element to the taste. The jerk seasoning added a lovely bit of spice, the gherkins were a fantastic addition and the cheese held its own amongst all the other flavours. A good sandwich, of both style and substance. 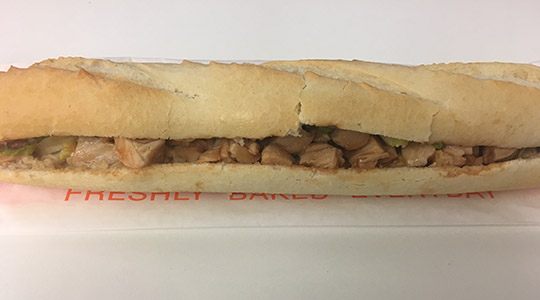 Baguette 4 Less were the most efficient out of all of the sandwich shops I had visited. An absolute haul of baguettes adorned the shelf behind the till, a server who was going so fast I’m not sure he was an actual human, and a cash-only till were all to thank for this. No sooner had I joined the back of the queue, was I walking back out with a ‘BBQ chicken baguette’ in one hand, and a pile of one pound coins in the other.

On first impressions, the baguette was exactly what I expected, a white hard baguette in a paper bag. However on closer inspection the filling was tightly packed in and generous. There was a welcome addition of some lettuce. The taste was fine and the bread was good and a healthy size.

If you want a cheap lunch but your loan is running out or it’s at the end of the pay month, I’d say there are probably worse places to go than Baguette 4 Less.

What: Wilshire ham and cheddar

I’m four sandwiches in and yet this is my first with two bits of sliced bread either side of the filling. Philpotts' fridges were filled with all kinds of sandwiches, sliced bread, baguettes, wraps, the lot! But it was the ‘Wiltshire ham and cheddar with mixed leaves and black peppers’ that I plumbed for. It looked fresh, homemade and packed to the brim with filling, something you can expect from the sarnies in any of the Philpotts dotted about town. They may be the closest shop to a big chain on this list, with 20 shops throughout the country (four in Birmingham) but the service and the way they go about preparing their food certainly gives them that independent local café feel.

I dived straight into the sandwich, immediately immersing myself into the brown seeded bread. It was light, fresh and had a strong flavour. The ham and cheese were as good a double act as Ant and Dec, each holding their own against the other but still coming together to make something even better. The green leaves added a nice after-taste and brought some good crunch to proceedings.

A very solid effort, made even better when taking into account the price. This would have gone well alongside a bag of crisps, so if you intend on visiting grab a bag as well.

It’s the question generations have argued over, is a wrap a sandwich? Many say no, many say yes. Does it matter either way? Not really. It’s a form of bread around a filling and that’s all that matters here. Plus this one sound really really good so I threw the rule book out!

I chose the ‘Poached salmon, wasabi mayo, seaweed, cucumber and spring onions with a spinach wrap’. After four not so healthy sandwiches and with my stomach feeling a little heavy I was also glad to have finally found a sandwich (or wrap) that sounded quite light and good for me and I loved it. The wrap was bright green, which I’m assuming was the spinach shining through. It was prepared fresh in front of me and the salmon was poached to perfection. The wasabi mayo had enough bite to it without blowing my head off. The salad and seaweed worked well in the middle of all of this.

Oh it was good, really good. I’ll be back at Wrap Lab very soon and recommend you pay it a visit also.

It was wild ride through Birmingham’s surprisingly busy and competitive sandwich scene, but a very enjoyable one. I’ve probably not even covered 10 per cent of the sandwich shops in Birmingham this week. Maybe this lunchtime instead of wandering into the supermarket to see if there is anything decent left in the meal deal, look a little deeper and pay an independent sandwich shop a visit. You may even pick something up for a quid.

A visit from Myo-band: Food and Nutrition students get the low down on...

Making the most of Ramadan during the COVID-19 pandemic

Three best places to get a curry in Birmingham