Eight places to get the best craft beer in Birmingham

With a thriving brewery scene, Birmingham is one of the craft beer hotspots in the UK at the moment! Fancy giving a craft beer a try? We list the best pubs and bars in Birmingham where you can sample a selection of great craft beers, from IPAs to stouts, sours and fruit beers!

Nestled in the heart of Digbeth, Dig Brew is a brewery and taproom doing Birmingham proud - plus they sell pizza. What more can we say? Their beers on tap are constantly changing as they create and collaborate on new beers, and they also do tours so you can see the brewery in action before enjoying the spoils on their outside seating area.

Honourable other mentions in Digbeth go to Kilder (think industrial chic interior with the ultimate cheese toasties) and Beer Digbeth -  the artist formerly know as Clink (see if you can spot the label of your favourite beer on their wall - cracking playlist too).

A firm favourite in the Jewellery Quarter, 1000 Trades offers a selection of always-changing beers on tap, interesting cans and bottles, plus pop-up food options to suit every taste from month to month.

Don't fancy beer? They also serve natural wine - the only boxed wine that should be seen, really. Don't fancy wine either? Well, The Vanguard upstairs is the best cocktail bar in Birmingham (awarded by the Birmingham Prestige Awards), but they also serve mead if you fancy a more old-fashioned evening...

Tilt combines the holy grail of pastimes - craft beer, and pinball! Their beers on tap change frequently, but you can also buy cans and bottles to take away and enjoy at home. Why not enjoy a lambic sour whilst destroying the top score on their Guardians of the Galaxy pinball machine? Oh, and did we mention they have cake, too?! 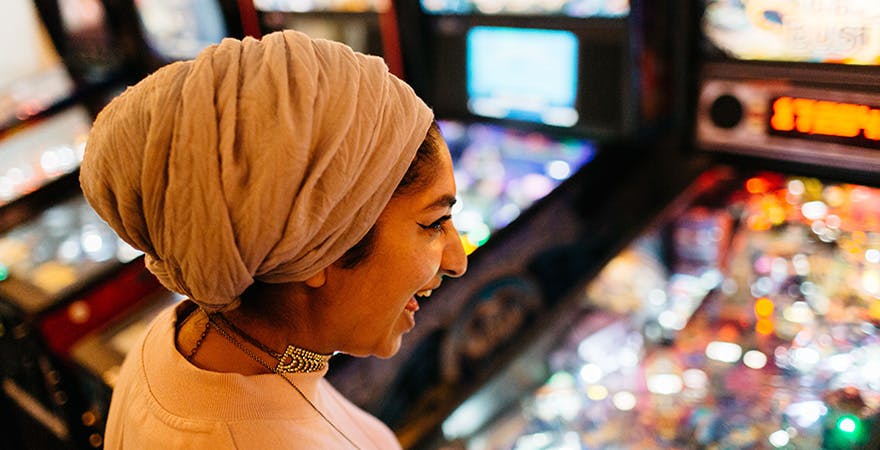 John Bright Street boasts many a fine establishment - Jamaican food: tick, pizza: tick, casino: tick! However, although you can get a great beer in Brewdog, why not try something different in Cherry Reds just opposite.

Not only do they have the glorious Liefmans Fruitesse permanently on tap (a lovely summery, fruity beer reminiscent of cherryade - but the grown up version!), but they also feature a carousel of frequently changing beers on tap to try alongside their great food and cakes. They even have board games if you fancy thrashing your friends at Scrabble.

The only chain on this list, but nevertheless a worthy contender for one of the best places in Birmingham city centre to try a beer with a difference. Featuring a huge range of local beers and ones brewed further afield, there's something for everyone's tastes - Raspberry Mimosa Slushie beer, anyone? Drool.

They also do food which is a good idea when some of their beers on tap are a whopping 11%! The bar is huge, too, which makes it a good option for larger groups.

A stone's throw from the Jewellery Quarter, The Wolf always has a great selection of beers and, better yet, the handles on their taps are shaped like animals. Win win. Often, they'll put on events with breweries or types of beers so you can learn whilst you sup. Even better, they do a cracking cheese board to complement your craft beer.

Right next to Victoria Square, you'll find Purecraft Bar and Kitchen - a laid-back, open plan bar ideal for sharing a flight of beer with friends for those times when you're just not sure what you fancy. They also offer beer tastings and events, plus a delicious food menu from nibbles to full meals - depends how many beers you're planning on consuming!

Right by Snow Hill Station, this is the perfect place to meet friends to share a mixed grill and some of Birmingham's best craft beer, and they should know - they brewed it themselves! Why not start with the aptly named 'Birmingham Lager' and a fat naan? You could even walk round the corner to The Wolf afterwards for something a bit different.

Now, enjoy - but in moderation! We would definitely recommend keeping an eye on those ABV percentages as some of the fruitier beers, and especially Belgian beers, can be deceptively strong. Many breweries make their own non-alcoholic versions, too, so be sure to ask if you don't fancy drinking but still want to try a new beer.