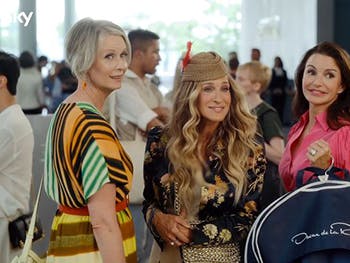 Birmingham City University sociologist Dr Kadian Pow reflects on the ‘Sex and the City’ revival series, its life lessons and why viewers shouldn’t be criticising it.

Dr Kadian Pow teaches Sociology and Black Studies at Birmingham City University’s School of Social Sciences and has research interests in the areas of popular culture, television and feminism.

I enjoyed ‘And Just Like That…’,especially as the show began to find its footing by episode five. I was interested enough to see how some of my predictions and desires would develop. Most of all I gave the series a chance to develop its identity as separate from ‘Sex and the City’. With the first ten episodes in the can, I can firmly say that I like what the show is becoming.

Though I am far from the economic reality of Carrie, Miranda, Charlotte and friends, their storylines do reflect a reality I see around me in physical and online worlds. I would not call myself a ‘Stan’ of ‘And Just Like That…’ by any stretch, but some of the series reviews I have seen have forced my defensive hand. In an article in The Guardian, Lucy Mangan referred to the series one finale, and entire run of the new series, as ‘a regressive, embarrassing disappointment’. Furthermore, she asserts that the show ‘ruined’ ‘Sex and the City’.

I recognise Ms. Mangan’s attitudes because I blogged about TV, on Tumblr, for six years. I’m used to seeing people swaddle their unmet desire in a wholesale dismissal of an entire TV show - not a redeeming quality shall be acknowledged. Ms. Mangan is representative of a cadre of ‘Sex and the City’ fans who feel the same way. Such criticism is representative of an unadmitted longing that frames their viewing of ‘And Just Like That…’ - they wanted the show to be ‘Sex and the City’. They wanted its comedy beats, its whimsicality, its centring of a group of privileged white, heterosexual women who were cut off from much of the reality of New York City. Most of all, they wanted Michael Patrick King to hold the ‘woke’, please. Basically, give us 2022, but make it early 2000s. Just say you didn’t want anything to change except the age of the characters.

If there is anything regressive, embarrassing or disappointing about ‘And Just Like That…’, it is the inability of some of its viewers to admit they wanted, or expected, an entirely different kind of show. What is not OK is maligning a show for that which it never promised.

‘And Just Like That…’ fulfilled the desire I harboured to see female characters of colour who had their own lives and challenges that were presented to us. Check. I wanted to see them in ways absent of the old Hollywood trope of ‘magical Negro’ or ‘magical Person of Colour’, there to make the life of the white female characters better without anything in return. Check, mostly. I wanted to see what Carrie, Miranda and Charlotte could learn about themselves and the world by interacting and developing relationships with younger characters. Check.

The show addressed relevant and contemporary themes. Charlotte, and Miranda to a degree, had to contend with the tumultuous adolescents of their children, and a realization that those kids live in a different world than Charlotte grew up in. She traversed her children’s growing sense of bodily autonomy and exploration of their gender identities. She stumbled through it just like they did.

Both Carrie and Miranda dealt with different sorts of grief. For Carrie it was the death of her husband. Deciding who to be in this next, impromptu, phase of her life is something she contended with for all of the new first series. Out of disappointment can spring an incredible opportunity. Speaking of which, Miranda had to make some similar decisions in the wake of the death of her marriage and long-time identity as a heterosexual woman. She experienced a second adolescence, replete with tumultuous feelings of falling in love and making selfish, risky, intuitive decisions with which her 35 year-old self would have disagreed.

As new secondary characters, Seema and Naya exposed two sides of the same disappointment coin. In her fifties and otherwise content, the ideal mate still eluded Seema. Like many women her age, despite independence and success, she was not immune to the cultural expectations to be coupled. Naya had the ideal spouse and career, but motherhood eluded her, until she realised that, perhaps, that’s not what she wanted at all. We leave her in a liminal space because she and her husband are not on the same page about parenthood.

All of the characters went through journeys which exposed their deficiencies and gaps in knowledge about themselves and others in their small world. Yes, at times the attempts at inclusive storylines were a bit ham-fisted, sounding more like Tumblr posts than fluid conversation - Rock and their parent’s exploration of identity binaries, that entire podcast situation with Carrie, and nearly everything to do with Che! But I appreciate the effort, because, with effort comes development and an opportunity for improvement. No attempt means no accountability.

Many of us fear getting it wrong as we try to adjust to a world in which we are called upon to respect people’s culture, chosen pronouns or changing identities. A world in which our point of view is but one. ‘And Just Like That…’ isn’t just a cute catchphrase that is consistent with Carrie’s character, it is an acknowledgement that life comes at you fast sometimes. Michael Patrick King and a slew of new producers, including the three main actresses, took the ‘Sex and the City’ characters out of their ‘main character syndrome’ of the past and placed them into a world that could serve as mirrors pointed at them and us, the audience. Some of us don’t like the reflection. But, for god’s sake, just say that!