Removing ‘No Outsiders’ school lessons is adding to LGBT people being targets for hate speech and violence, warns social scientist 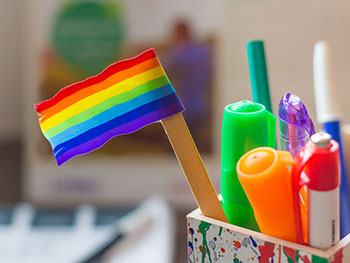 Birmingham City University criminologist and gender researcher, Ben Colliver, argues there are ‘serious implications’ for children who are being denied access to the No Outsiders programme.

Recent days have seen a number of articles surrounding schools across England withdrawing lessons for students that focus on equality and diversity, particularly in relation to gender and sexuality as a result of parental complaints. These issues have been engaged with by thousands of people on social media, supporting the withdrawal of the lessons based around arguments of ‘indoctrination’ and the ‘sexualisation’ of children, a claim made by media personality and columnist Katie Hopkins. In this piece, I wish to address these claims and provide a counter-narrative to these dominant forms of argument.

Firstly, claims have been made that these lessons are used as a way of indoctrinating, or converting young children to identify as lesbian, gay, bisexual, transgender or another form of sexual and/or gender minority. It is claimed that these children are too young to understand these issues and are easily manipulated by a liberal education system. However, for many centuries the education system in England and Wales, and society more broadly has been heteronormative, in the sense that our education and our consumption and engagement in society is based around the idea that everybody is heterosexual. This can be seen throughout the time in which Section 28 was in force, that prevented the ‘promotion’ of a homosexual ‘lifestyle’ being taught in schools.

For many years, ideas of heterosexuality overwhelmingly dominated education and mainstream media and other social structures. The fact that today there are many LGBT people that exist who were raised throughout these periods in time, suggests that children cannot be easily indoctrinated, or LGBT people simply wouldn’t exist.

Interestingly, given that many LGBT people are aware of their sexuality from an early age, the narrative of ‘indoctrination’ or ‘conversion’ is not extended to these children who are perpetually exposed to heterosexual content. This is because heterosexuality is often discussed in relation to love, marriage, family and commitment among other things, whilst homosexuality and bisexuality are often understood purely in relation to sexual practice.

This undoubtably influences claims being made that children are being ‘sexualised’. The historic conceptualisation of homosexuality and bisexuality as ‘sex practices’ are reductive and ignore the love, marriage, commitment and family that are often shared between people of the same gender. As a society, we do not make claims of sexualisation when our children read a book that contains a child being raised by a heterosexual couple, as this narrative is only evoked in the context of same-sex relationships.

The No Outsiders programme, which teaches tolerance of diverse groups, has been deemed ‘age-appropriate’ by OfSted. It can therefore be concluded that primary school children are not being exposed to the details and practicalities of sex between two people of the same gender, rather they are being made aware that these different types of relationship exist. In doing so, schools aim to promote tolerance, acceptance and respect for others who seem ‘different’ to ourselves.

There are serious implications for children in education who do not have access to this information. The child who attends school and is raised by same-gender parents does not see their family recognised. The child who is experiencing attraction to someone of the same gender does not see themselves recognised. The child who finds the courage to disclose their gender and/or sexuality to others then becomes subject to ridicule and persecution because their peers don’t recognise their identity as authentic. This results in heterosexuality remaining unremarked, as needing no explanation, and those young people who identify as something other than heterosexual must continually explain and justify their existence.

The narrative of surrounding homosexuality, bisexuality and transgender identities that are rooted within models of deviance, perversion and difference lead to the continual social policing and social control of those who do not identify as heterosexual and cisgender. METRO Charity released a ‘Youth Chances’ report in 2014 that identified young LGBT people experience higher rates of homelessness, self-harm and feelings of unsafety than their heterosexual, cisgender peers.

Objecting to these lessons being taught on the grounds of ‘morality’ further adds to LGBT people as being legitimate targets for hate speech and violence. This is perpetuated by calls for an educational system that only caters for those who are deemed to be the ‘norm’.