Studying for a PhD can sometimes lead to unexpected discoveries and opportunities. For Sarah Doyle, a PhD student in the School of English, secondary reading during her research led to a discovery that would inspire her new poetry collection, Something so wild and new in this feeling.

We spoke to the prize-winning poet about her new release and how her research influences her writing.

The poetics of meteorology

My PhD researches the occurrence and function of weather in contemporary British poetry and in selected Romantic poetry. During the mid to late 2010s I’d observed anecdotally an increased manifestation of meteorological language and imagery in new poetry collections being published in Britain, and in poems published singly in poetry journals and anthologies; and I wanted to look at that more closely. As well as engaging directly with climate crisis, I’d discerned that many poets were utilising weather as a means of articulating other anxieties beyond the ecological, and I found this conflation of meteorology and broader concerns fascinating.

I started my research in 2019, having proposed my PhD in 2018 against the background of Brexit, a time of significant national crisis, and I’m interrogating poetic meteorological engagement as both a response to and refuge from political and social turmoil, as well as a metaphor for the expression of personal, private griefs. Identifying the British Industrial Revolution as a historical period of analogous social and cultural unease, I’m applying similar analytical criteria to my examination of selected Romantic poetry, which led me to read Dorothy Wordsworth’s journals.

Discovering Dorothy Wordsworth’s journals was nothing short of epiphanic. I was aware of her, and had encountered small journal extracts previously, but had never immersed myself in her writing before. I’d identified some weather-rich Romantic poems to examine in my PhD, and had turned to the journals as secondary reading, to provide a broader context.

I was blown away by the immediacy and vibrancy of Wordsworth’s writing, how it felt no less vital or relevant for the passing of time, and I simply lost myself in the text, it was so engrossing. The more I read, the more I was forming connections between her thematic preoccupations and my own. Recurring images, phrases, and motifs were jumping out at me, not least those that were concerned with weather.

In the spirit of creative experimentation, I started to extract some phrases and fragments that resonated, and to reorganise these on the page as a way of shining a light on the poetic signifiers that characterise so much of Wordsworth’s writing – and one thing led to another! Although these poems are my work and are informed by my own sensibilities, they feel entirely collaborative to me, and at all times during the creative process I’ve been at great pains to treat the source text with sympathy and sensitivity.

What is Something so wild and new in this feeling? 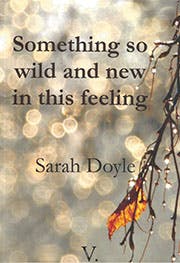 Something so wild and new in this feeling is a pamphlet of collage poetry that I’ve created from phrases and fragments of Dorothy Wordsworth’s journals. She was as weather obsessed as I am! Many of Wordsworth’s journal entries open with observational remarks on prevailing weather conditions, her experiences are often framed within a meteorological context, and weather is a key theme threaded through my book.

Wordsworth’s observations of the natural world are extraordinarily detailed and vividly expressed; but of even greater relevance to me was the presence of numerous poetic signifiers in her prose. Her language is sensory and vivid, frequently musical, rich in metaphor and simile, and powerfully imagistic.

In creating these poems, I’ve attempted to draw out these elements of Wordsworth’s writing and to articulate it afresh. Each of the poems’ titles, and the title of the book itself, is a quotation from the journals. In addition to the weather phenomena that populate the poems, the collection is teeming with life, and is both a celebration of the non-human and a consideration of ecological fragility.

Some poems also explore Wordsworth’s rich and complex inner life, and this relationship between interiority and exteriority – as conveyed via natural world imagery, and meteorology in particular – is a recurrent theme in my own poetry as well.

My PhD has provided a formal structure for my natural curiosity and has expanded my reading considerably. I’ve found the experience very enabling so far, and this is in no small part due to the encouragement and support of my supervisors (Professor Gregory Leadbetter, Dr Derek Littlewood, and Dr Serena Trowbridge), who have been fantastic.

I was initially concerned that so much critical reading and analysis might make me more constrained, more self-conscious, and less creative as a poet; but I’ve found the opposite to be true, and have been inspired by many of the texts I’ve encountered. I’ve come to appreciate the symbiotic relationship between creative and critical thinking and writing, and how, in practice, they work in tandem, with each informing the other.

These poems emerged from my research, but were completely unanticipated, and I find the permission to be responsive and experimental within a PhD context quite thrilling.

Something so wild and new in this feeling is available to by now from V. Press and featured poems can be read at Atrium Poetry.

Thinking about a PhD?

Take a look at our PhD courses and become an expert in your field.

Life after a PhD

10 tips for working from home during your research degree

Diary of a self-isolating PhD student