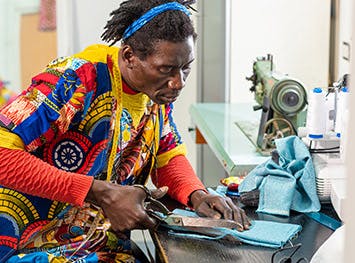 A researcher who has investigated the lack of diversity in the craft industry will present their findings – and launch the second stage of the research – at an online event this June.

Karen Patel, a Research Fellow within Birmingham School of Media, has spent the past two years working closely with the Crafts Council on addressing inequality and diversity within the world of craft.

The research is funded by the Arts and Humanities Research Council’s prestigious Innovation Fellowships scheme, which allows postdoctoral researchers to carry out impactful projects with industry collaborators.

The project has involved interviews and observations with ethnically diverse makers from around the UK, as well as a podcast series, online workshop series in collaboration with STEAMhouse, a conference held in December 2019 and an artist commission.

The research shows that despite being a thriving industry, Karen has found that the vast majority of people working within craft – as well as those that sit on interview panels – are white.

“Craft has become so popular,” Karen says. “Shows like All That Glitters and The Great British Sewing Bee have shown it has a wide appeal, but it’s such a tough industry to work in, especially if you are from a marginalised group.”

Karen’s research with the Crafts Council has helped to highlight the lived experiences of makers from ethnically diverse backgrounds in UK craft.

“The experiences of racism and micro-aggressions in professional craft spaces, such as studios and fairs, are widespread” Karen reveals. “Interviewees have told me about racist incidents, loaded comments and unfair judgements about their craft work.

“Many have said how they are made to feel like they don’t belong in professional craft, they feel isolated and alienated.

“Given how craft has become so important for mental health and wellbeing during the COVID-19 pandemic, the opportunity to participate in craft and enter different craft spaces should be there for everyone, but it currently isn’t, and that is evidenced in this research.”

Throughout the research, Karen has been involved in numerous forums, as well as an anti-racism sub-group of national network Craft UK. She has also published two working papers.

On Tuesday 29 June, Karen will present the final report at an event entitled Making Changes In Craft. The report includes findings from phase one of the research, as well as recommendations for next steps.

“There are short-term ideas, such as anti-racism statements within craft organisations and spaces, and longer-term concepts to do with decolonising the craft curriculum, as well as funding mechanisms to give greater support to those trying to make a positive change.”

The online event will also see Karen launch phase two of the project, which will involve more research with craft social enterprises.

Phase two was made possible after a successful application for follow-on funding from the AHRC, which will allow Karen to continue her work with the Crafts Council for two more years.

“The first phase focused on more formal, professional organisations, but there is such a rich diversity of craft practice occurring around the craft ecology which needs further attention,” Karen says.

“I’m also interested in social enterprises because I think they are crucial for helping us imagine a craft sector which is less elitist and more inclusive.”

“Some research will take place in Australia, where I have identified a number of craft social enterprises, so I will talk to the people running those and use that to inform practice in the UK craft sector.”

Karen believes her work so far has already made a positive difference.

“Many makers have been having conversations regarding the lack of diversity for many years, but little has changed. With this research working towards real change, the makers I have spoken to see it as a major step forward.”

Furthermore, Karen’s attendance at an open forum on racism in craft helped to inform the Crafts Council’s diversity strategy.

Karen hopes that change will continue in both the UK crafts industry and in the wider world.

“I hope the conversations that people have been having across the board are turned into real action.”

Interested in attending? Book your place now via Eventbrite.