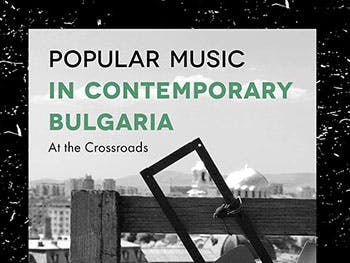 A lecturer from Birmingham City University’s Centre for Media and Cultural Research (BCMCR) has released her debut book, a thorough and captivating examination of popular music in Bulgaria and its links to social, political and cultural contexts.

Asya Draganova, Lecturer of Media and Communication, has penned Popular Music in Contemporary Bulgaria: At the Crossroads, which stems from Asya’s PhD project, which was completed in 2016. “It’s something which is dictated from both my scholarly interests and my own history as a Bulgarian growing up in a post-communist era,” she says. “Being very engaged with music, as both a musician and a fan, my motivation and insight into this came from a personal and cultural perspective.”

While Bulgarian music has been researched in a traditional context, little work has been done on the contemporary side of things. “The focus has previously been on things that have given us international recognition, linked more to music folkore,” Asya explains. “In terms of ethnography, it has been similar – researchers have focused on musicians who link to the notion of locality and authenticity, while popular music hasn’t been as central. I have tried to create a more general portrait.”

Asya says there have been a number of surprises along the way. “One of the most prominent themes that emerged was that of post-communism,” she says. “I didn’t anticipate how influential it was and how both the cultural production in general and popular music sectors had been framed by this kind of transition. Many of my research participants – who comprised of music artists, business figures, cultural intermediaries and young audiences - had experienced this in both a professional and personal context, so that significance was something I didn’t expect.”

To celebrate the book’s release, Asya and BCMCR are hosting an event on Wednesday 10 April as part of the Popular Music research cluster. “I have turned it into a thematic event concerning borders and hinterlands,” Asya explains. “There will be a number of external guests attending, offering views on Brexit and music, alternativity, how ethnographies can be used to study music and more.”

Asya believes the book is evidence of a number of things BCMCR thrive in. “There’s the popular music research aspect, but there’s also those links to heritage and history,” she explains. “In BCMCR, there’s an interest in studying social engagement and change, and the book certainly links to that on the basis of exploring how popular music culture creates rituals of resistance.”