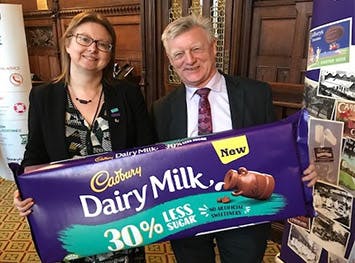 A Birmingham City University professor has spent a week shadowing an MP in Westminster, as part of a scheme that matches university researchers with policymakers in Parliament.

The partnership has been formed through the Royal Society Pairing Scheme, which sees academics spend a week in Parliament and, in turn, the MP visiting the academic’s place of work.

Maxine overcame stiff competition from a record number of applicants, and believes her research interests chime perfectly with Steve’s. “We talked about how science needs to underpin decision-making across Parliament,” she explains. “Particularly concerning mental health, structural heart disease and medical devices.”

Steve is no stranger to Birmingham City University. As part of 2018’s scheme, he partnered with biomedical sciences lecturer Ashok Patel and opened a new research centre at BCU.

Maxine believes partnering with someone with prior knowledge of the institution has been advantageous. “Steve has done this before so he was ready to answer all my questions,” she says.

“He has good connections with BCU and many constituents that are involved with the University. There are a lot of common interests we can build on.”

Maxine’s week saw her shadow Steve at a number of meetings, many with a local focus. “I was surprised at how much BCU-related business I could do,” Maxine says.

“I could talk about our foundation degrees, teacher training, apprenticeships and research activity.”

Other highlights included a tour of the Palace of Westminster, discovering the breadth of select committees and parliamentary groups, and lots of “other opportunities where our academics can feed their research findings in order to influence policy.”

Maxine believes there’s a range of key findings she’s discovered. “I’ve gained a better understanding of how select committees recruit witnesses and how BCU can be more strategic in our approach to being involved,” she says. “They want to get more academics from outside London, with a wide range of expertise and diversity, to come forward.

“I also saw lots of possibilities for our graduates that I had not been aware of, which we can build into careers talks. For example, I don’t think we’d thought before about psychologists or sociologists becoming civil servants in government departments, but most teams, no matter the focus, need to consider human behaviours.”

Steve will return to BCU in the near future for his reciprocal visit, with Maxine eager to show him a number of new developments.

“We want to show Steve the recently launched Law Clinic and Business Advice Centre, which are making a difference to real world clients,” she explains. “We also hope to align with the launch of the Birmingham 2029 initiatives developed by our School of Social Sciences, which aims to research and influence the city of the future.

“I am sure that, as a Birmingham MP, Steve will be very interested in that!”