Investigating gay masculinity on dating apps and beyond 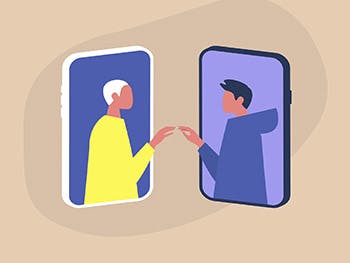 Charlie Sarson’s research has always focused around gender and sexuality, specifically gay men. With dating apps a prominent part of many peoples’ lives, he used his PhD to investigate the online and offline behaviours of a cohort of users.

When it comes milestones, there have been a few unexpected ones that Charlie Sarson lists.

For example, being interviewed by GQ Magazine is a particular standout. “GQ got in touch with me to contribute to an article on femme shaming on gay dating apps,” Charlie says. “It’s nice when you feel your research has transcended in that way.”

The research in question has seen Charlie investigate such apps and a cohort of gay men invested in masculinity that use them, exploring their behaviours and attitudes both during their swiping sessions and outside of the apps.

Charlie began his research journey at Birmingham City University, studying BA (Hons) Fine Art. He moved on to Goldsmiths College, UoL, for his Master’s in Contemporary Art Theory, but the threads of a research project were beginning to form.

“The interest to research gender and sexuality have always been there,” Charlie states. “The PhD project grew out of personal interest. I have used dating apps before, so I began researching how masculine gay men began using and interacting with them.

“I also spent time in prominent gay areas of London, notably Soho and Vauxhall. I wanted to see how certain comments and attitudes from masculine gay men made other gay men feel.”

When it came to where to study his PhD, Charlie had to choose between Goldsmiths and Birmingham City University. He reached a verdict after meeting with John Mercer, Professor of Gender and Sexuality at BCU.

“When we met, we clicked,” Charlie explains. “We developed a really strong working relationship. I got the sense straight away that there would be a real collegiate environment and I’d be on an equal footing.”

Charlie then received Midlands3Cities funding for his PhD.

However, Charlie feels dating apps are not the root cause of this behaviour. “They’re not responsible for these broader cultural practices, as you can find these behaviours in any area. These new platforms have allowed for some of these cultural practices to extend and develop.

“They also existed long before dating apps became the norm. Some people argue dating apps are the reason why gay men are always single and unhappy and so on, but it’s not true.However, there are certainly cultures that exist on these apps that could lead to some questioning their self-value and worth.”

After completing his PhD studies and passing his viva, Charlie is now focused on researching and lecturing. He is also part of John Mercer and Clarissa Smith’s Masculinity, Sex and Popular Culture research network.

When asked about one of his favourite parts of PhD study, Charlie says the opportunity to visit new places is a big one. “Going to speak at various places was great,” he confirms. “I attended conferences in Italy, Finland and Denmark, among others, and I’ve been able to form a big network which I can work with post-completion.”