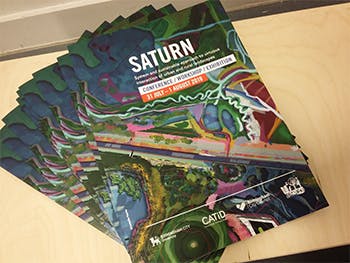 Planning for the future

The event, which took place on Wednesday 31 July and Thursday 1 August, was hosted by the University’s Critical Artistic Thinking in Design (CATiD) research hub. The event was staged as part of CATiD’s SATURN project, which has seen institutions across Europe partner together to create more sustainable cities that are more effectively linked with the landscapes around them. “The conference has given partners and stakeholders the opportunity to become involved, exchange ideas and discuss future plans and developments,” says Anastasia Nikologianni, researcher at CATiD. “The exhibition has provided the visual material, creating a better understanding of these regions.”

Changing the landscape of Birmingham…and beyond

As well as showcasing Project SATURN, the conference and exhibition also demonstrated CATiD’s West Midlands National Park (WMNP), a project based on Professor of Landscape Architecture and CATiD lead Kathryn Moore’s vision for the region. The latter, which will see seven cities connecting to create hundreds of miles of green space and changing perceptions of the landscape in the Midlands, was subject to a BBC documentary in 2018. “The conference has been a great way to showcase the actions taken by the city of Birmingham, the West Midlands Combined Authority and several institutions in the region,” Anastasia says. “There was a strong interest in both SATURN and CATiD's WMNP proposal. A number of suggestions and ideas for future actions are now being evaluated and will be presented in the future. Plans for specific case studies related to SATURN are already in place and we have been approached by other European cities and institutions that want to join this initiative.”

The event proved to be a huge success, leading to possibilities of future involvement and collaboration from the attendees. There are also plans for a future BBC documentary with Kathryn as CATiD’s reputation continues to grow. “Conferences such as this provide CATiD and the University the chance to demonstrate our research to a much broader audience and make connections with different institutions,” Anastasia says. “The conference and exhibition have inspired many positive discussions.”