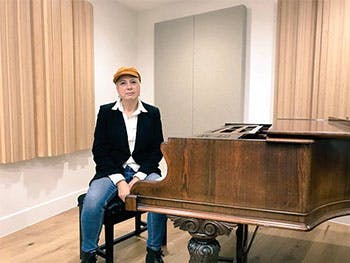 A doctoral researcher is on a thrilling mission to bring opera to the masses.

Susie Self, based in the Royal Birmingham Conservatoire, is conducting research into how opera – known as a high art and traditionally attracting an exclusive clientele – can appeal to broader sections of society. “The idea has come from years of performing as an opera singer,” Susie says. “I have performed at some amazing venues, including the Royal Opera House and Glyndebourne, but only a small portion of people attend these kinds of events. If we said football was only considered suitable for the elite, there’d be outrage – why should opera be held for such a small section of society?”

A night at the opera

One method Susie has pursued to counteract this is staging an opera of her own, titled Quilt Song. “I wanted to find something in the Birmingham arena of history that would appeal to the local community, especially those that do not attend opera,” she says. Susie then discovered a 100-year-old play written by a Birmingham Old Repertory Theatre manager which promoted diversity in society, providing her with a key starting point. “The sentiments aligned with my own. Quilt Song is called such because it uses quilting – bringing together different materials into one unifying object – as a metaphor for diversity.”

Working with the community

Susie’s work saw her work with a range of people in the community. “I sat with a quilting circle and composed music, trying to emulate the qualities of quilting,” she explains. “I’d be composing and then playing it to the quilters, asking for their thoughts.” She also worked extensively with Birmingham Ormiston Academy, teaching young musical theatre singers with no previous opera experience. “I worked with the students for two years, ensuring they’d be emotionally invested and prepared to perform in Quilt Song,” Susie says. “I provided crossover music – Sondheim, Lloyd-Webber’s Phantom of the Opera – and then created special songs and arias for them to sing. It proved to be incredibly successful for them, and now a number of them are going to apply to study at the Conservatoire.”

Quilt Song was performed for two successful, sold-out nights at the Birmingham Old Rep in late October. Susie was incredibly pleased with the praise the show received, particularly from those hitherto unfamiliar with opera. “Everybody got what I was saying and they loved it,” she says. “When I was doing my research, people told me they wanted opera with a positive female role model, not a princess or a witch that’s killed. They wanted someone that does something important. Having Maureen Braithwaite from the Conservatoire play the role of Rosa Parks was immensely powerful, as she informed me that there hadn’t been, up until this point, a positive black woman’s role in opera for her to sing.”

Susie believes the Conservatoire and wider University have given her the support she needs to thrive. “You are given a huge amount of encouragement to be expressive, as well as the freedom to pursue what you’re passionate about, without feeling like you have a great list of criteria dragging you down,” Susie says. “The likes of PGR Studio create events that inspire me to think outside of the box. I’m hugely grateful for all the support I receive.”