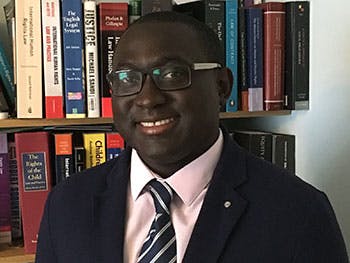 What links a popular Channel 4 game show hosted by Noel Edmonds, children’s rights in West Africa and an international consultancy company? The answer is Lamin Daffeh, an inspirational PhD researcher breaking down cultural barriers to education in his native country, The Gambia.

Lamin’s research looks into the cultural barriers surrounding children’s rights to education. “The popular narrative for African children not attending school is that it’s only due to poverty,” Lamin says. “However, it goes deeper than that. My PhD looks at the cultural influences as one of the main barriers to children’s rights to education – for example, some people living in indigenous African societies believe that the western system of education is taking away their culture and identity. They believe that education is a luxury enjoyed by only children in London and New York.”

While this issue affects both genders, female students are particularly marginalised from attending school. “Some parents believe that by the time girls have turned 16, they should be getting married rather than continuing with education,” Lamin says.“They want them out of school to help with household chores.”

The benefits of education

Lamin began challenging these perceptions in 2013, when he opened a school in The Gambia. After setting up his charity, Fresh Start Foundation, the school now has nearly 430 pupils, provides clean drinking water and established a community farm. “At first, there were some parents that were reluctant about their children going to school. However, I am first-hand proof that western education works,” Lamin explains. “I left the village to further my education but not only that I have maintained a strong relationship with my community. I have also contributed towards enhancing education and community development projects within the rural areas. Acquiring education enabled me to help myself and support many others.”

It is hard to believe that Lamin has achieved all this and more when you consider he once left a game show with just £20 to his name. “The village where I’m from was struggling with poor water supply and I wanted to help them, so my friend recommended I apply for Deal Or No Deal,” he explains. “My target was £7,000, and almost straight away the banker offered me that sum. At this point, there were still so many high sums of money available I knew I had to turn it down…from there, it only went downhill.”

But while Lamin only left with a paltry amount of money, his appearance and cause won the hearts of the viewing public. “From my appearance, I was contacted by various people wanting to help and from that fresh start really began to develop,” he says.

Alongside Lamin’s doctorate research in international human rights law and his charity, he has also recently set up his own consultancy company, The AIDER Group Ltd. “From my charity work, I have developed a large collection of contacts, so I decided to use these to set up a consultancy company,” he says.“AIDER is the alliance for international development, education and research.”

Lamin has successfully brought together his PhD and consultancy business interests, and says he achieved this through the help of Birmingham City University’s staff. “The School of Law have been fantastic. They told me to focus on the areas that I’m interested in,” he says. “There is no other place to conduct my research other than at the Birmingham City University.”