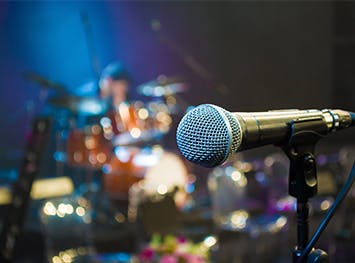 Dr Craig Hamilton, as part of the Birmingham Live Music Project (BLMP), has been investigating the impact of both Brexit and Covid-19 upon the live music industry, both in the Second City and beyond.

Furthermore, the team wanted to investigate how these challenges are being managed and whether any coping strategies could be identified and applied to other areas.

Craig, who is a Research Fellow in the Birmingham School of Media, feels that the research was needed, particularly with live music on a global scale facing numerous crises.

“There were numerous existing concerns related to Brexit, mostly due to the lack of clear guidance, but Covid-19 has added an extra layer of worry for stakeholders, as well as immediate concerns over income,” says Craig.

The project was funded by the Creative Industries Policy and Evidence Centre (PEC), which is led by Nesta and funded by the Arts and Humanities Research Council.

Liaising with local and national organisations

The team worked with a range of stakeholders, including local musicians, promoters and Birmingham City Council. They also liaised with national organisations such as UK Music and The Music Venues Trust.

“Birmingham is not only a regional music economy, it is a corner of a global one,” Craig explains. “Alongside the bars, clubs and venues, there are recording studios, music managers, graphic designers and many more.

“These inter-related, localised musical activities are tied to regional, national and international systems of policymaking. By exploring how to sustain and support a live music industry on a local level, we aimed also to contribute to conversations on a broader scale.”

Craig and the team aimed to uncover how the sector’s stakeholders responded to the current challenges of Brexit, Covid-19, and everything in between, as well as looking at solutions emerging at national and international levels.

Craig and the team are currently writing up their final report, which will reveal some surprising outcomes.

“There are pockets of activity all over Birmingham that show great potential for development, given the right support,” he explains. “But we will also show there are many threats that go beyond the imminent problems associated with Brexit and Covid-19.

“Issues such as zoning regulations, the proposed clean air zone and even the Commonwealth Games all point to the need for information, the sharing of best practice and other support.”

The BLMP framework has already been adopted by another UK city’s regionalmusic board, and Craig and the team are working hard behind the scenes to grow their research internationally.

“We have a larger bid under consideration that will roll out the BLMP processes and methods to look at how the nationwide UK live music sector is responding to and recovering from Covid-19,” he explains.

“We’ve also co-written a journal article with live music researchers from the Netherlands, and are in discussions with them over developing an international bid.”