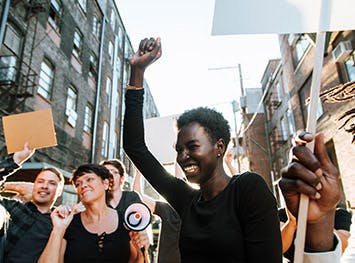 A PhD researcher focusing on leadership in the Black Lives Matter (BLM) movement believes that the current protests have shown a clear shift from having one traditional leader to a host of people taking charge.

The rise of online communities

Ashley Cole, who is in her final year of PhD study at Birmingham City University, believes the protests taking place around the world show the BLM movement’s leadership has altered, particularly on the internet.

“There are many ways online communities congregate to protest activity – instead of having one traditional model of a leader, there are many leaders and many leaderful practices that are conducted online,” Ashley explains.

“It is evident we no longer need a formal leader to make decisions on behalf of everyone. There’s now a real opportunity to study the decentralisation of leadership on social activism.”

With Ashley’s research also focusing heavily on the social media side of BLM, she believes there may be a divide between those that are committed to eradicating racial inequality and those that are jumping on the bandwagon.

“I would like to see who is actually protesting for change and who is just doing it for their social media presence,” she says.

“I have seen many influencers, celebrities and fashion industries promoting the hashtag #BLM, but are they just doing it because it’s popular?

“Would the fashion stores that promote that hashtag actually hire someone like me? Are these people going to vote for a political party that has my best interests as an African-American woman at heart?”

Ashley’s inspiration behind studying BLM stemmed from personal feeling. “The deaths of Mike Brown and Trayvon Martin were personal and emotionally-charged for me,” she explains.

“My brother was around the same age as them when they were killed. I began to think of his safety. My brother is kind, generous and introverted, but as a big and tall Black man, he is automatically categorised as a threat.

“This inspired me to dive deeper into what BLM had to offer Black communities across the USA in order to keep us safe.”

Ashley is currently finishing up her thesis, and has learned some emotional stories about racial inequality.

“There have been some heart-breaking accounts of BLM activists fighting for me to continue what I do. They put their lives on the line,” she explains.

“However, I know someone has to tell their stories because these people are important.

“My research also dives into how influential women are in these Black social movement organisations, as well as how Black feminism and intersectionality began to surface.”

The deaths of George Floyd and Aubrey Ahmed have led to passionate protests across the UK and beyond, and Ashley believes BLM chapters need to forge connections in order to foster real change.

“I would like to know how they are dealing with the situation and the relationships they are building with other social justice organisations in the community,” she explains.

“I would also like to know how the national BLM organisation is helping chapters in terms of finances and coping mechanics.”

However, with leadership being more evenly spread out due to the rise of social media, Ashley advises people to show their support by making connections.

“Attend BLM meetings in your neighbourhood and reach out to other social justice organisations to build alliances. There is strength in numbers.”